An amusing case of alarmism in action from Watts Up With That.  A few days ago the USGS published a paper entitled: A Century of Ocean Warming on Florida Keys Coral Reefs: Historic In Situ Observations:


There is strong evidence that global climate change over the last several decades has caused shifts in species distributions, species extinctions, and alterations in the functioning of ecosystems. However, because of high variability on short (i.e., diurnal, seasonal, and annual) timescales as well as the recency of a comprehensive instrumental record, it is difficult to detect or provide evidence for long-term, site-specific trends in ocean temperature. Here we analyze five in situ datasets from Florida Keys coral reef habitats, including historic measurements taken by lighthouse keepers, to provide three independent lines of evidence supporting approximately 0.8 °C of warming in sea surface temperature (SST) over the last century. Results indicate that the warming observed in the records between 1878 and 2012 can be fully accounted for by the warming observed in recent decades (from 1975 to 2007), documented using in situ thermographs on a mid-shore patch reef. The magnitude of warming revealed here is similar to that found in other SST datasets from the region and to that observed in global mean surface temperature. The geologic context and significance of recent ocean warming to coral growth and population dynamics are discussed, as is the future prognosis for the Florida reef tract.

In  "Data Reveal Florida Keys Sea Surface Temperatures Haven’t Warmed in 80+ Years*", Bob Tisdale, a frequent author on global lack of warming and sea surface temperatures destroys their primary result, that temperatures have risen over the "several decade" interval. As with most of his posts, it's data packed and dense, but the best illustration is: 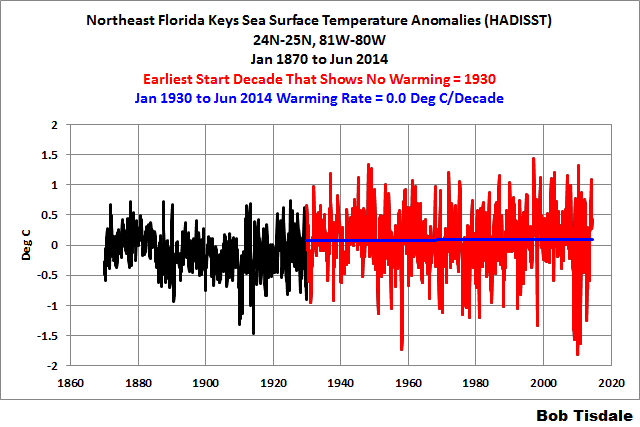 Using carefully cherry-picked data sets, (lighthouse keepers, really?) the USGS had hoped to continue the campaign to convince the public that global warming was already doing all kinds of harm and requires massive government intervention to fix a problem that is, simply put, not happening.