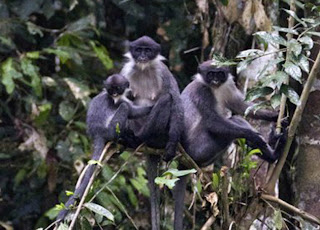 
Scientists working in the dense jungles of Indonesia have "rediscovered" a large, gray monkey so rare it was believed by many to be extinct. They were all the more baffled to find the Miller's Grizzled Langur — its black face framed by a fluffy, Dracula-esque white collar — in an area well outside its previously recorded home range.

The team set up camera traps in the Wehea Forest on the eastern tip of Borneo island in June, hoping to captures images of clouded leopards, orangutans and other wildlife known to congregate at several mineral salt licks. The pictures that came back caught them all by surprise: groups of monkeys none had ever seen. 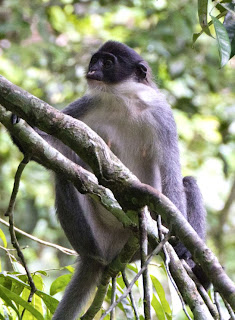 With virtually no photographs of the grizzled langurs in existence, it at first was a challenge to confirm their suspicions, said Brent Loken, a Ph.D. student at Simon Fraser University in Canada, and one of the lead researchers.The only images out there were museum sketches.

"We were all pretty ecstatic, the fact that, wow, this monkey still lives, and also that it's in Wehea," said Loken.

The monkey, which has hooded eyes and a pinkish nose and lips, once roamed the northeastern part of Borneo, as well as the islands of Sumatra and Java and the Thai-Malay peninsula. But concerns were voiced several years ago that they may be extinct.

I think it's cool when species thought to be extinct are re-found.  It reaffirms my faith in primate fallibility...