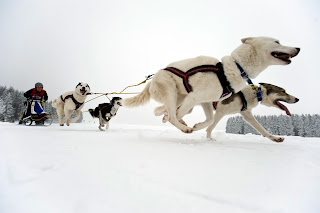 
FAIRBANKS — The Copper Basin 300 sled dog race is the latest victim of Alaska’s weird winter weather pattern as race officials canceled the event Sunday morning, less than a day after the race started. The race came to a halt when a section of trail was deemed impassible.

A statement by race marshal Greg Parvin said the trail between Meier’s Lake and Sourdough had unusually deep snow conditions, with high winds and bitter cold. Two Rivers musher Allen Moore, who was one of the race leaders, told his handlers that the trail got bad about 12 miles out of Meiers Lake and snowmachines were getting stuck in attempts to break a trail for the race. 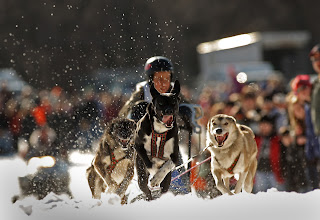 Must be that Global Warming Climate Change we keep hearing about. 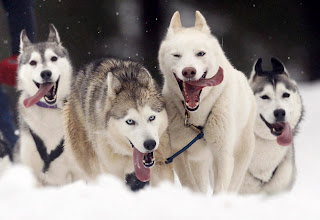 Meier’s Lake is about 75 miles into the race route. Temperatures were consistently 45 to 50 below zero, according to race officials.“The decision was made in the interest of the dogs, mushers and race staff,” according to a statement the CB300 posted on its Facebook page. Mushers, handlers and race officials returned to Meier’s Lake Roadhouse on Sunday morning, where the decision was made to cancel the race.

The Copper Basin 300 bills itself as “the toughest 300 miles in sled dog racing.”

Skye sends her sympathies to the dogs denied their proper romp.

Pictures from some other place.  A bunch of really cool ones, if that's what you like.
Posted by Fritz at 6:00 AM