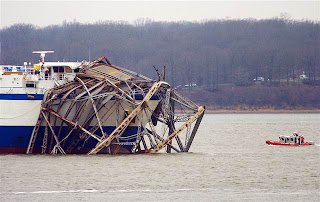 Two spans of the Eggner Ferry Bridge at US 68 and Kentucky 80 were destroyed Thursday night by the Delta Mariner, which was too tall to pass beneath the structure. No injuries were reported on the bridge or in the boat, which was carrying rocket components from Decatur, Ala., to Cape Canaveral Air Force Station in Florida. 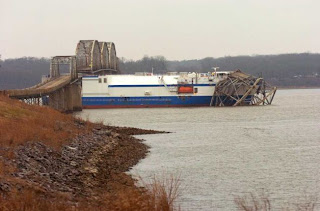 Too tall to pass under the bridge?  I'm guessing that Captain's license just became worth less than a Greek Government bond.


Robert Parker was on the bridge Thursday night and said he had to slam on his brakes when he saw a section missing ahead of him.

"All of a sudden I see the road's gone and I hit the brakes," said Parker, who lives in Cadiz. "It got close."

Parker said he stopped his pickup within five feet of the missing section. He said he didn't feel the vessel strike the bridge but "felt the bridge was kind of weak."

Email ThisBlogThis!Share to TwitterShare to FacebookShare to Pinterest
Labels: boating