Solar Cycle 25 could be one of the weakest in centuries.

The Sun's Great Conveyor Belt has slowed to a record-low crawl, according to research by NASA solar physicist David Hathaway. "It's off the bottom of the charts," he says. "This has important repercussions for future solar activity."

The Great Conveyor Belt is a massive circulating current of fire (hot plasma) within the Sun. It has two branches, north and south, each taking about 40 years to perform one complete circuit. Researchers believe the turning of the belt controls the sunspot cycle, and that's why the slowdown is important. 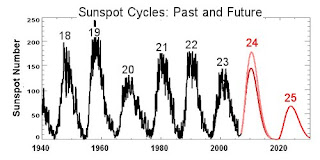 "Normally, the conveyor belt moves about 1 meter per second—walking pace," says Hathaway. "That's how it has been since the late 19th century." In recent years, however, the belt has decelerated to 0.75 m/s in the north and 0.35 m/s in the south. "We've never seen speeds so low."

According to theory and observation, the speed of the belt foretells the intensity of sunspot activity ~20 years in the future. A slow belt means lower solar activity; a fast belt means stronger activity. The reasons for this are explained in the Science@NASA story Solar Storm Warning.

"The slowdown we see now means that Solar Cycle 25, peaking around the year 2022, could be one of the weakest in centuries," says Hathaway.

What this article is not saying is that the strength of sun spot cycles has been observed to correlate strongly with global climate, with weak cycles being associated with colder climate, with such events as the Maunder and Dalton Minimums.  The reason is unclear (the actual decrease in total solar energy is very small) but may be related to the strength of the solar magnetic field, and how it shields the earth from cosmic rays, which help seed clouds, and reflect light and heat back into space.

Another thing they also fail to mention is that the solar magnetic field is weakening, and if it continues to weaken at it's current rate, sunspots may no longer be visible to the eye, similar to the situation in the Maunder Minimum.  This may occur as early as 2015-2017.

It would appear that there is an excellent chance that the earth will be entering a period where solar forces suggest a lower than average temperature regime.