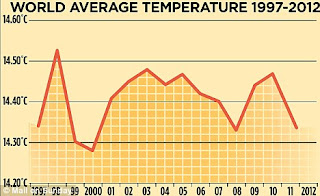 Based on readings from more than 30,000 measuring stations, the data was issued last week without fanfare by the Met Office and the University of East Anglia Climatic Research Unit. It confirms that the rising trend in world temperatures ended in 1997.

Meanwhile, leading climate scientists yesterday told The Mail on Sunday that, after emitting unusually high levels of energy throughout the 20th Century, the sun is now heading towards a ‘grand minimum’ in its output, threatening cold summers, bitter winters and a shortening of the season available for growing food.

I think it's too early to be calling for a global cooling period, but the cards are starting to look stacked in that direction.  A few years ago, when global warming was all the rage, I counseled people to wait 20 years before making that call. It hasn't been 20 years yet, and it looks like it's falling apart. Now I should warn people to hesitate before making the opposite prediction.