Dutch girl, 16, becomes youngest to sail around the world on her own


Dutch teenager Laura Dekker finished her solo sailing journey around the world in good spirits, despite endless debate about the terms under which she is allowed to be at sea.

She completed her 518-day trek today after docking her yacht Guppy in St. Maarten, ending a yearlong expedition that supposedly made her the youngest person ever to sail alone around the globe, though her trip was interrupted at several points.

Ms Dekker, 16, faced several court cases from the time she announced her intentions to travel the world at the age of 14. She said government organisations tried to deter her from her journey, and because of that, she may not return home to the Netherlands. 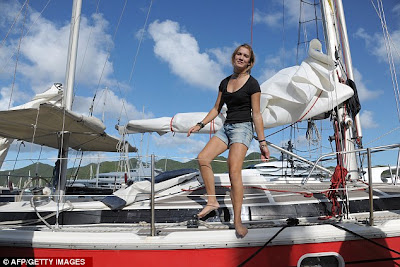 Cute girl,  and that's an amazing accomplishment. I don't think she'll regret doing that.
Posted by Fritz at 10:43 PM