I'll Have the Fried Fish 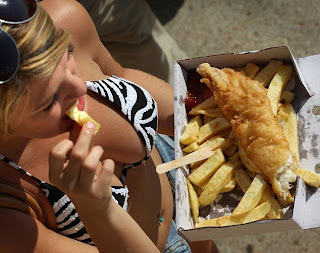 They say there is mounting research that it is the type of oil used, and whether or not it has been used before, that really matters. The latest study, published in the British Medical Journal, found no association between the frequency of fried food consumption in Spain - where olive and sunflower oils are mostly used - and the incidence of serious heart disease.

Spanish researchers followed more than 40,000 people, two-thirds of whom were women, from the mid 1990s to 2004. At the outset they asked them how often they ate fried foods, either at home or while out. They then looked to see whether eating fried foods regularly increased the likelihood of falling ill from having coronary heart disease, such as a heart attack or angina requiring surgery.

Dividing participants into four groups, from lowest fried food intake to highest, they found no significant difference in heart disease. There were 606 incidents linked to heart disease in total, but they were split relatively evenly between the four groups.

The authors concluded: "In a Mediterranean country where olive and sunflower oils are the most commonly used fats for frying, and where large amounts of fried foods are consumed both at and away from home, no association was observed between fried food consumption and the risk of coronary heart disease or death."

The evidence is starting to mount that the whole dietary paradigm of high carbohydrate, low fat, low meat diet has been a mistake.  Carbohydrates are more likely responsible for the increase in arterial plaque that plagues modern people than lipids.  That's not to say that eating lots of fat can't make you fat, it can, but still, the major problems with metabolic diseases probably arise though consumption of excessive carbohydrates.


Commenting on the findings in the BMJ, Professor Michael Leitzmann of the University of Regensburg in Germany said two other studies - one from Costa Rica and another by an international team - had also failed to find strong evidence of a link.

He said: "Taken together, the myth that frying food is generally bad for the heart is not supported by available evidence.

So maybe have the fried fish and skip the fries.

Wombat-Socho at The Other McCain" lists this, and other slightly naughty posts in his weekly Rule 5 round up, "Lily was Here", as does The Classical Liberal in "Sexy Little Thing".
Posted by Fritz at 9:45 PM