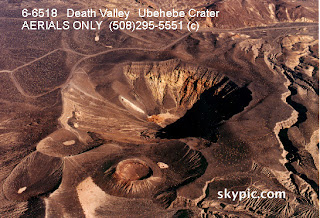 A volcanic crater in Death Valley is shown to have exploded as recently as 800 years ago, and has exploded several time previously:

In California’s Death Valley, death is looking just a bit closer. Geologists have determined that the half-mile-wide Ubehebe Crater, formed by a prehistoric volcanic explosion, was created far more recently than previously thought—and that conditions for a sequel may exist today.

Up to now, geologists were vague on the age of the 600-foot deep crater, which formed when a rising plume of magma hit a pocket of underground water, creating an explosion. The most common estimate was about 6,000 years, based partly on Native American artifacts found under debris. Now, a team based at Columbia University’s Lamont-Doherty Earth Observatory has used isotopes in rocks blown out of the crater to show that it formed just 800 years ago, around the year 1200.

That geologic youth means it probably still has some vigor; moreover, the scientists think there is still enough groundwater and magma around for another eventual reaction. The study appears in the current issue of the journal Geophysical Research Letters.

A steam explosion is what pops popcorn.