The Contestant Answer:  How do you take a dinosaur's temperature? 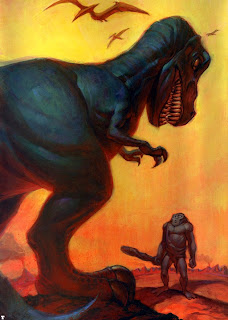 Or, you could measure the isotopic composition of it teeth..


How warm (or cold) these long extinct creatures were remained an enduring mystery — until now.   Using a new approach, a team of researchers led by the California Institute of Technology (also known as Caltech) figured out how to take the body temperatures of dinosaurs by analyzing the concentration of certain isotopes preserved in the mineral bioapatite, found in teeth.

The researchers studied two stable, but slightly heavier, isotopes of carbon and oxygen — carbon-13 and oxygen-18. The isotopes tend to bond with each other, or "clump," at lower temperatures, and the lower the temperature, the more carbon-13 and oxygen-18 will clump. By analyzing the clumping of those isotopes, the researchers were able to determine fairly precise temperature values — to within a range of 2 to 4 degrees Fahrenheit (1 to 2 degrees Celsius). 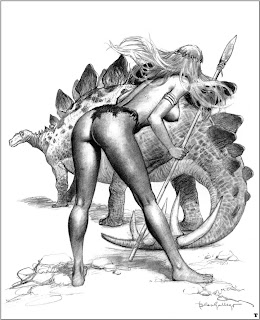 The animals, as it turned out, were relatively warm — although not necessarily warm-blooded. They could have been cold-blooded (based on the definition for that metabolic design), but with warm body temperatures because of their large size — a phenomenon known as gigantothermy.

"What our study resolved is that at least some dinosaurs were physically 'warm', and so — in the simplest sense — were warm-blooded," Eiler said. "But we need more information to tell how they were warm-blooded — whether through carefully controlled endothermy, like mammals and modern birds, or through some other physiological strategy, like the 'gigantothermy' used by some large ectothermic animals. We are actively working on the measurements of smaller dinosaurs that will resolve this issue."

So even after they answered the immediate question, how warm was a dinosaur, they didn't get the answer to the ultimate question, were dinosaurs truly warm blooded in the sense that we are.  My best guess is yes.