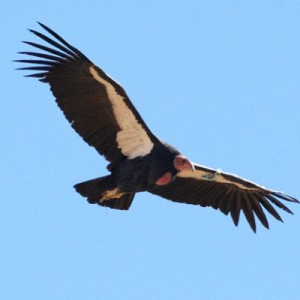 
A shadow, however, is falling on the Tehachapi, cast by the nine-and-a-half-foot wingspan of a Pleistocene-born bird of uncommon intelligence and longevity. With the investment of tens of millions of dollars and extraordinary effort by scientists, North America’s largest bird, the California condor, is staging a spectacular comeback after verging on extinction 25 years ago. The 200 birds in the wild today (out of 400 total) are rapidly reinhabiting their historic range in one of the nation’s great achievements of conservation biology. Naturalists can once again marvel at a bird that manipulates hot winds to soar hundreds of miles without flapping its wings. 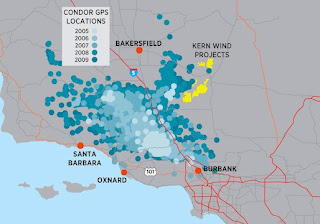 It’s a flight path that is taking the condor perilously closer to the spinning blades of Tehachapi wind turbines that depend on those same thermal currents to generate power; biologists fear it’s only a matter of time before the condor begins hitting the 500-foot-high machines. A single death could be catastrophic for the wind industry, the regional economy and, not least, the condor. The loss of an alpha bird could disrupt breeding patterns and an intricate avian hierarchy, according to biologists. “It would be a major disaster,” says Mark Tholke, an executive with wind developer enXco, which is building several projects in the Tehachapi.

A Vulture falls to a wind turbine in Spain

But in better news for renewable energy, the Feds have decided that a 370 Megawatt solar power plant  in the Mohave Desert does not further threaten the endangered Desert Tortoise.
Posted by Fritz at 10:04 PM