What Ever They're Against, I'm For - Part Deux 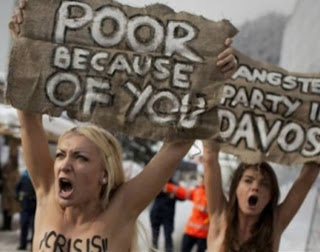 The girls from Femen (the Ukrainian Women's rights group known for their topless protests against, well, darn near everything) have decided to go to Davos, to protest the World Economic Forum.  In fact, three bare chested women were arrested yesterday in the protests, as amply documented here (NSFW link).

This puts me in a bit of a conundrum, because while I wish to support whatever it is Femen opposes in the interest of having them continue their protests, I'm not sure I can honestly muster support for the Davos forum, especially in view of the fact that this years gathering seems to be bound and determined to "fix capitalism". 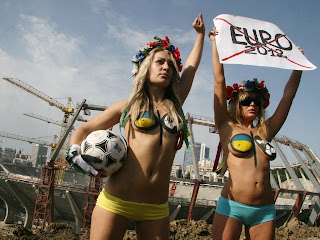 Much as the average liberal will tell you how "real communism has never been tried", I would argue that real capitalism has never been tried either.  The idea of free market capitalism arose long after the idea of national governments arose, so governments have always been there first, to "regulate", i.e. obtain revenue, graft, and to favor friends, or even worse in many cases, stupid ideas and products that won't sell.

However, the Femen women have also decided to protest nuclear power, (caution, NSFW) which I firmly support, so I have to give one up to the girls on that one.

Wombat-Socho at The Other McCain features this and my other cuties posts this week in his giant compendium of Rule 5 posts "Patience."
Posted by Fritz at 3:11 PM