Want SAV Back in the Bay? Don't Bother... 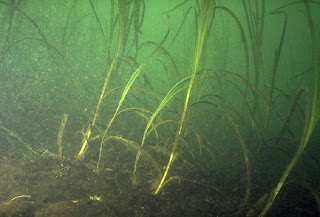 
A scientific review has offered advice about trying to plant large-scale underwater grass beds in the Chesapeake: Don't bother. At least not until the Bay's often-murky water gets clearer.

The recent report by the Bay Program's Scientific and Technical Advisory Committee recommended that efforts to replant large underwater grass beds be discontinued until environmental conditions improve, although it said small-scale projects in carefully targeted areas should continue.

The state-federal Bay Program in 2003 had set a five-year goal of planting 1,000 acres of submerged aquatic vegetation, or SAV, in the Chesapeake in the hope of jump-starting the growth of underwater meadows in areas that had often been barren for decades.

But the goal, estimated to cost more than $30 million, was never fully funded. The $5 million which was spent, mostly by federal agencies, resulted in the planting of fewer than 150 acres by 2008, most of which died.

The report nonetheless said that scientists demonstrated they had the technical expertise to harvest large amounts of seeds and plant large, multi-acre projects. Those techniques work: Virginia Institute of Marine Science researchers planted 37.8 million eelgrass seeds on 309 acres in four different bays in the Virginia seaside starting in 1999. These beds are now 4,200 acres.

But in the Chesapeake, almost all of the restoration projects died, apparently because of poor water clarity and high summer water temperatures. Eelgrass, the focus of much of the work, needs clear and cool water to survive.

This corresponds to my feeling on the ability of humans to restore ecosystems; if an organism has the ability to easily live in the area, it's very difficult to keep it out, but if conditions aren't right, you can waste an awful lot of time and money trying to make it.