Attorney General Alan Wilson sent details of an analysis by the Department of Motor Vehicles to U.S. Attorney Bill Nettles.

In a letter dated Thursday, Wilson says the analysis found 953 ballots cast by voters listed as dead. In 71 percent of those cases, ballots were cast between two months and 76 months after the people died. That means they "voted" up to 6 1/3 years after their death.

The letter doesn't say in which elections the ballots were cast.

The analysis came out of research for the state's new voter identification law. The U.S. Justice Department denied clearance of that law. 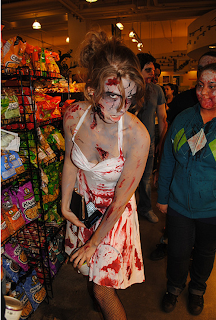 Just because you're dead is no reason for the system to deny you the right to have your vote cast for you.

But now, Instapundit comes with the bad news that the zombie craze has jumped the shark, now that special ammo, targets, and gunsights are being marketed as "zombie killers".  You know, killing zombies might just be construed as  denying their civil right to have their vote cast for them. (I know, I just used that joke, so sue me). 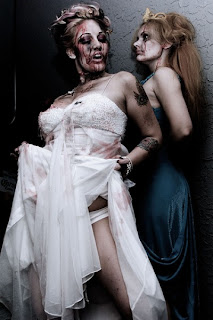 Anyway, you know what this means don't you?   Time for me to use up a few cute zombie pictures I've been saving for just such a purpose.

So, do suppose zombies carry ID so they can show them at the polls to vote? Oh, that's right, you're not allowed to ask someone to produce an ID to vote; that's racist.  And it might discriminate against zombies.
Posted by Fritz at 9:20 PM