Will the South Will Rise Again?

Should Virginia Secede from the Menhaden Union?

Secession is in the air once again in Virginia as a state senator has introduced a bill that would withdraw the commonwealth from the union of states that oversees fishery management along the coast.

Virginia State Senator Richard Stuart’s bill would separate Virginia from the Atlantic States Marine Fisheries Commission (ASMFC), a consortium of states from Maine to Florida that oversees the management and harvest of 24 species of fish ranging from flounder to stripers. Among those fish is the menhaden, a baitfish that is an essential part of the food chain for game fish and whose population most commissioners (and conservationists) believe may be threatened by overfishing.

In Boston in late 2011, the ASMFC commissioners voted overwhelmingly to curtail commercial landings of menhaden by as much as 37 percent over 2010 harvest levels. This marked the first time the ASMFC has voted to decrease the menhaden harvest. Why the change? The commission’s most recent stock assessment found that menhaden stocks, in steady decline for the past half-century, were now at a historic low, and that although menhaden are apparently producing enough eggs to supplement the stock, those eggs are not becoming juvenile menhaden, much to the consternation of researchers.

I doubt it will come to that. 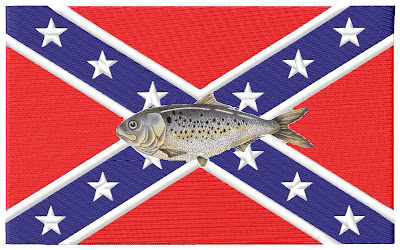