Too Late for That, I'm Afraid

Oil, gas industry opposes use of word 'fracking' for method

The word is “fracking” — as in hydraulic fracturing, a technique long used by the oil and gas industry to free oil and gas from rock.

It’s not in the dictionary, the industry hates it, and President Barack Obama didn’t use it in his State of the Union speech — even as he praised federal subsidies for it.

The word sounds nasty, and environmental advocates have been able to use it to generate opposition — and revulsion — to what they say is a nasty process that threatens water supplies.“It obviously calls to mind other less socially polite terms, and folks have been able to take advantage of that,” said Kate Sinding, a senior attorney at the Natural Resources Defense Council who works on drilling issues.

As I wrote in my very first post of fracking, "It's Not Just a Curse on Battle Star Galactica."

This reminds me a bit of some of the other culture wars over terminology; "anti-abortion" vs. "pro-life" , "politically correct" vs "diverse", etc.  I've got no problem with using fracking.  It's a good contraction from the actual term for fracturing.  And it's too late to shake it, you might as well live with it, and try to turn it positive.  Associating it with lowering gas prices would help make it a popular word in a hurry. 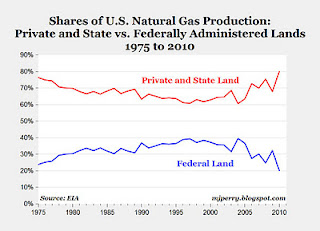 Sort of related: Obama Deserves No Credit for the Oil and Gas Boom


"The one person who deserves no credit for this [oil and gas] boom is Barack Obama. In fact, this Administration has bent over backwards to make oil and gas production and exploration as difficult as possible. According to the Institute for Energy Research (IER), the Obama Administration has been issuing BLM oil and gas leases at the lowest pace of any president in the last 30 years – in fact at half the rate of the Clinton White House and 80% slower than in the Reagan era, dragging their feet to please the environmental lobby (see top chart above).

That looks like a pretty long-term trend, that perhaps Obama has exacerbated.