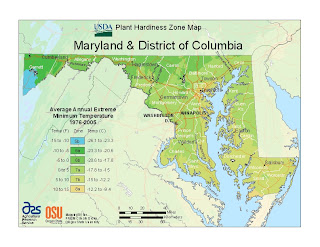 On Wednesday, the Department of Agriculture unveiled what most gardeners have known for years: a new plant hardiness zone map that shows generally warmer low temperatures for winter than the department’s previous map from 1990.

In the Washington region, the District and other communities bordering the Potomac River or the Chesapeake Bay are now in the warmer half of Zone 7, which formerly reached only as far north as Tidewater Virginia. Most of Virginia and Maryland are in the cooler side of Zone 7, with a low temperature range of zero to 5 degrees Fahrenheit. Before, the areas found themselves in the colder Zone 6, along with much of the Appalachian piedmont.
....
Online only and interactive, the new map reveals wholesale shifts in zone boundaries since the last one was compiled as a wall map 22 years ago. Some areas turned out to have colder winters — the western slopes of the Sierra Nevadas and Pierre, S.D., for example...

It's pretty well known that either the first or second warmest year in the last century was in 1998, and since then the climate arguably cooled slightly.  The original map was drawn during the increase in temperatures from a relatively cool period in the 1970s when scientists were concerned that the world might be slipping back to an ice age.


Agriculture officials stressed that the new map is not a tool to measure climate change and that many of the boundary shifts are the product of better and more complete data and sophisticated computer algorithms.

However, it's pretty clear that  Washington Post writers must not read their own products, at least with any care:


Cuccinelli must not be much of a gardener


If we’re up to our camellias in alligators, why are Virginia’s right-wing politicians continuing their persecutions of academics who suggest that global warming is real and man-made?

Attorney General Kenneth Cuccinelli has made a second career out of persecuting former University of Virginia climatologist Michael Mann, who says mankind is responsible for global warming, a view held by most scientific experts. After Cuccinelli saw his attempt at subpoenaing Mann’s records quashed by a court, his conservative comrade, Del. Bob Marshall of Prince William County, teamed up with the American Traditions Institute to get some of the records through the Freedom of Information Act.

Scientific evidence apparently means little to Cuccinelli or Marshall. What does it matter? Cuccinelli is running for governor and Marshall for the Republican nomination for U.S. Senate. Playing to the wing elements pays dividends.

So, even though the new map is not supposed to be taken as evidence of climate change, you can if it can be used to attack a Republican, at least if you're the Washington Post.

The reason Cuccineli is after Mann is that there's pretty good evidence that Mann has played fast and loose with Freedom of Information  Act (FOIA) requests, requesting other scientists to destroy evidence, and withholding information.  Political or not, those are valid reasons for investigation.