Are You Willing to Buy a Whale? 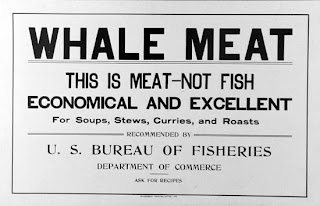 Saving the Whales (And Eating Them Too?)


A temporary worldwide moratorium on commercial whaling went into effect in 1986, but given its exceptions and loopholes, more whales are being killed annually than before the ban. Something is awry. If the efforts of whale huggers worldwide aren’t working, then could markets be the solution? Three American scientists recently resurrected an idea first floated by ecologist C.W. Clark in 1982 to save the whales by setting a price on their heads. The article appeared in the journal Nature. Much like carbon credits, conservationists could buy whale quotas, pocket the credit, and save as many whales as money could buy. A minke might fetch $13,000, whereas fin whales might be priced at $85,000.

It’s an intriguing proposal—one that made me wonder if we’d soon be eating whale again. Well, barring the unforeseen and unlikely overturn of the federal Marine Mammal Protection Act, don’t expect to see whale margarine or “beef of the deep” making a comeback.

Of course, another example of such credits would be nutrient credits such as the ones proposed for Chesapeake Bay and similar systems (which have not been implemented yet).  Depending on how they are implemented, I suppose anti-pollution activists could put their money where their mouth is, and outbid potential polluters for the nutrient credits and prevent their use.  Funny thing is, I've never heard that proposed.