Tentative Floron of the Year Award

It's unlikely this one will be topped in the next 23 days: Suspected burglar killed by alligator while fleeing deputies


An alleged burger met his demise when he was attacked by an alligator while running from deputies, according to the Brevard County Sheriff’s Office. Matthew Riggins’ body was found in Barefoot Bay Lake on Nov. 23. Deputies said he drowned as a result of an alligator attack.

Investigators said he told his girlfriend earlier in the month that he and another man were going to burglarize homes in the area of Tequesta Drive in Barefoot Bay.

A witness called deputies after seeing the men on Royal Palm Boulevard. 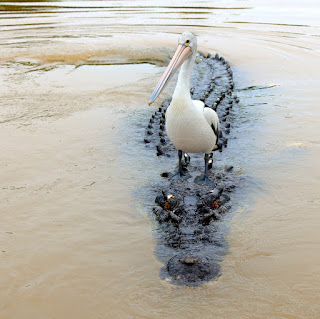 The not-so-rare crossover between Darwin Award and Floron of the Year applicant.

Riggins and his alleged accomplice ran from deputies into a wooded area and were never found. Deputies later learned Riggins had called his girlfriend while he was being chased. Riggins was later reported missing to the Palm Bay Police Department when he didn’t return home.

In case you care, his accomplice was found alive later.


During the recovery of his body, which was spotted just north of Ocean Avenue Way, dive teams encountered an 11-foot alligator around the body. Florida Fish and Wildlife caught the animal and had it euthanized.

That would be a most scary encounter. One of the surprising things about Florida is the number of big Alligators that show up unannounced near population centers.


Reports said the “forensic examination of the alligator located remains consistent with the injuries to Riggins inside the alligator’s stomach.”