Is Vlad Putin a Vampire? 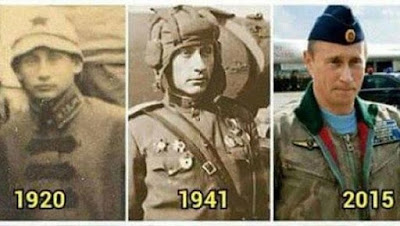 Vlad is a traditional name for a vampire. Vlad III was the name of the Wallachian prince whose blood thirsty reputation got him the sobriquet of "the Impaler", and led Bram Stoker to cast him as Dracula in his novel.


Vlad III, Prince of Wallachia (1431–1476/77), was a member of the House of Drăculești, a branch of the House of Basarab, also known, using his patronymic, as Vlad Drăculea or Vlad Dracula (Old Church Slavonic: Владъ Дрьколъ). He was posthumously dubbed Vlad the Impaler (modern Romanian: Vlad Țepeș, pronounced [ˈvlad ˈt͡sepeʃ])


He was a three-time Voivode of Wallachia, ruling mainly from 1456 to 1462, the period of the incipient Ottoman conquest of the Balkans. His father, Vlad II Dracul, was a member of the Order of the Dragon, which was founded to protect Christianity in Eastern Europe. Vlad III is revered as a folk hero in Romania and Bulgaria for his protection of the Romanians and Bulgarians both north and south of the Danube.
. . .
As the cognomen "The Impaler" suggests, his practice of impaling his enemies is part of his historical reputation. During his lifetime, his reputation for excessive cruelty spread abroad, to Germany and elsewhere in Europe. The name of the vampire Count Dracula in Bram Stoker's 1897 novel Dracula was inspired by Vlad's patronymic and reputation.

So he saved part of the world from the Muslims, and earned bad press in the process. Kind of like George Bush.
Posted by Fritz at 7:39 PM