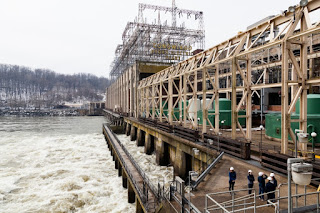 An energy bill moving through Congress could strip Maryland of its rig
hts under the Clean Water Act to require a permit for Exelon Energy Corporation to operate the Conowingo Dam, which discharges 40% of all the nutrient and sediment pollution into the Chesapeake Bay from the Susquehanna River.

"[The bill] would strip states of their authority under Section 401 of the Clean Water Act to develop license conditions to protect water quality," wrote Maryland Environment Secretary Ben Grumbles in a Nov. 25 letter to House Speaker Paul Ryan and Minority Leader Nancy Pelosi opposing the bill.
. . .
Under the proposed North American Energy Security and Infrastructure Act of 2015, the Federal Energy Regulatory Commission would become the lead agency, with the authority to overrule state regulators.

The bill comes as Exelon is trying to renew its operating license with FERC for another 46 years, but under Section 401, FERC cannot issue a license to Exelon without a water quality permit from Maryland.

An amusing twist on the usual state's rights arguments. In this case, the state wants to continue to have the right to impose special conditions on the dam to ensure their own environmental objectives, and is afraid the feds might not make that a priority:


Last year Maryland Department of the Environment moved to deny Exelon a water quality permit when the energy giant failed to address the dam's impact on the state's ability to comply with an EPA mandate to meet Clean Water Act standards for the Bay by 2025. Exelon is currently operating under a temporary license.

"Maryland's interest in protecting water quality is as important and relevant today as ever, particularly now as FERC considers the relicensing of the Conowingo hydroelectric dam," Grumbles wrote. "The Susquehanna River provides approximately 50 percent of the fresh water to the Chesapeake Bay and is an important driver of the Bay's water quality."

"Without appropriate conditions Maryland may not be able to meet its commitment to achieve EPA's Total Maximum Daily Load [reductions] for Chesapeake Bay," Grumbles wrote.

Conowingo is a major point of debate in the battle over the Bay Diet. Farmers like to point to the fact that a substantial fraction of the Bay's nutrient pollution washes over the dam on it's way south. This is hardly the dam's fault, except that because it has filled up in recent years, and it's retention capacity for sediment has essentially been reached. If the dam weren't there at all, there would be no such capacity. At the same time, the regulators would rather focus on agriculture than the dam (and sewage, and urban storm water) because the farmers will have to pay for their own costs and the cities will need (or at least expect) federal funds.
Posted by Fritz at 11:24 AM