A deadline for public comments on a plan to treat and release toxic water into the Potomac River has come and gone.

The Prince William County Board of Supervisors asked for a 60-day extension of a public comment period ending December 14 for the Possum Point Power Station near Dumfries and Quantico where water from coal ash ponds have been seeping into tributaries for years.

If the comment period was not extended, the Board threatened it would not support a request from Dominion Virginia Power to treat and release toxic water from coal ash ponds — a byproduct left over from when the power plant burned coal before 2003 — into the Potomac River.

Virginia’s Department of Environmental Quality is reviewing Dominion’s request, and would ultimately monitor a toxic water treat and release process at the site. The agency did not extend the comment period.

“Dominion is running roughshod over regulations in Virginia…they’re acting like a very bad corporate citizen,” said Prince William County Board of Supervisors Chairman Corey Stewart. “No one ever thought Dominion and the state would collude to pollute the river.”

Stewart said he was “disgusted” with the thought of releasing water once contained in toxic ponds at the site of the power plant into Quantico Creek, which will flow into Potomac River and eventually the Chesapeake Bay.

Umm, let me put that into scale for you: 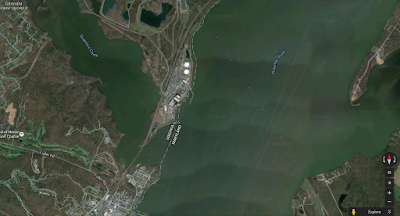 That google earth image shows the Potomac River and Quantico Creek. Possum Point is the sharp point at the edge pointing SSW. You can see the waste water ponds in question. As for the Chesapeake Bay: 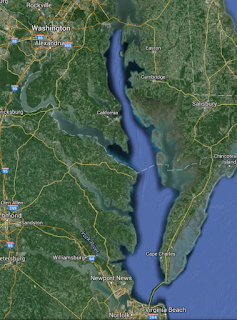 The whole Potomac River is that little arm on the left side.


The toxic wastewater ponds date back to the 1950s. Of the five ponds at Possum Point, only two are still wet. Coal ash was dug up from three dry ponds and placed into one of two wet ponds earlier this year.

Dominion’s ultimate goal: Pump all remaining water into one pond and treat, and then release the water. The remaining coal ash would be buried, and the pond would be capped off, similarly to the closure of a landfill.

Yes, coal ash makes water toxic, with a variety of heavy metals and just weird salts from the ash. We've known that a long time, and have been designing  treatment systems to take care of that for a long time. After the treatment, the water will be plenty safe to add to the Potomac River, particularly if it is pumped in over a period of time.


“There’s everything that we believe, based on science, that this will work,” Virginia DEQ chief David Paylor told a room of concerned citizens and politicians who gathered last month at DEQ’s Northern Virginia headquarters in Woodbridge.

If you really hated pollution, you'd just let them get this work done and clean up Possum Point. To oppose the clean-up is to take political advantage of peoples ignorance.
Posted by Fritz at 4:42 PM