In our last episode we saw how the Bernie Sanders campaign had peeked at Hillary's private donors on the DNC data base, and then abjectly apologized to her majesty. Now we learn that the "Sanders staffer" guilty of the intrusion had been recommended to the Sander campaign by the DMC itself:


The fight between Bernie Sanders and the DNC over the data breaching scandal is getting even more sexier. One adviser tells Yahoo News fired national data director Josh Uretsky was recommended to them…by the DNC itself!


“It’s not as if we conjured this guy Josh from thin air. This is an individual … who was recommended to us by the DNC and NGP VAN,” the adviser said.
According to the adviser, one of the references that Uretsky gave when he applied to work with the campaign was the DNC’s National Data Director Andrew Brown, who works closely with the shared voter file program.
“Andrew Brown spoke to us and gave him a positive review, as did [ ex-NGP VAN COO ] Bryan Whitaker,” the adviser said.. . .

It’s pretty interesting to see these allegations come out, especially because Sanders’ campaign is still pushing the “DNC is helping the Clinton campaign” idea. If it’s true, then the new allegations levied by Sanders’ crew may give credence to this. The DNC scheduled all but one of the 2015 debates on a Saturday, when most people were watching college football, suggesting they really are “in the tank” for Clinton.

Paranoia about moles is common in political campaigns, suggesting that such behavior is fairly common and well known on the inside. Did the Clinton campaign set up this scandal? 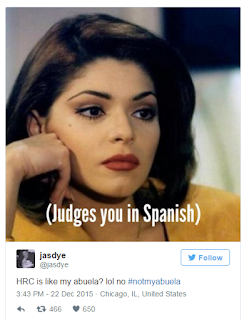 Meanwhile, Hillary's strategy of portraying herself as the the kindly Hispanic grandmother is not working out so well: Hillary Clinton Is ‘Not My Abuela,’ Critics Say


Hillary Clinton’s campaign for president has been savvy about talking to young voters in the parlance of the social web, using emojis, sleek graphics and other formats. But the list “7 things Hillary Clinton has in common with your abuela” seemed to backfire this week.

After Mrs. Clinton shared news of her daughter’s second pregnancy, a “content strategist” for her campaign posted the list, an effort to appeal to young Hispanic voters by pointing out how she was just like their abuelas, or grandmothers: She cares for all children. She reads to her grandchild before bedtime. She doesn’t tolerate disrespect.

Her critics were not impressed. Soon, the hashtag #NotMyAbuela was circulating as a critique of what some saw as a tone-deaf move to pander to a powerful but marginalized bloc of voters. Her critics pointed out that Mrs. Clinton did not grow up poor like their relatives, and was not separated from loved ones by country borders. Others just made their points with the magic of memes. . .


Hillary Clinton can’t help herself. Handed a news cycle victory on a silver platter by vulgar and mean-spirited remarks by Donald Trump, the presumptive Democratic presidential nominee flopped again. The problem this time was her attempt to exploit the announcement that daughter Chelsea is expecting the former First Family’s second grandchild. As I wrote earlier today, I think we’d all be better off if everyone, including the candidates, stopped treating politicians like celebrities. But the slip-up here wasn’t just the transparent effort to capitalize on a happy event in her personal life. Seeking to maximize the Democrats’ obvious advantage with Hispanic voters in an election cycle in which most Republicans have taken an anti-immigrant stand, Clinton began to promote herself to that community as everyone’s “abuela.” The response, even from Hispanic Democrats, wasn’t very positive.


Hillary Rodham Clinton was directly asked by congressional investigators in a December 2012 letter whether she had used a private email account while serving as secretary of state, according to letters obtained by The New York Times.

But Mrs. Clinton did not reply to the letter. And when the State Department answered in March 2013, nearly two months after she left office, it ignored the question and provided no response.

The query was posed to Mrs. Clinton in a Dec. 13, 2012, letter from Representative Darrell Issa, the Republican chairman of the House Committee on Oversight and Government Reform. Mr. Issa was leading an investigation into how the Obama administration handled its officials’ use of personal email.

“Have you or any senior agency official ever used a personal email account to conduct official business?” Mr. Issa wrote to Mrs. Clinton. “If so, please identify the account used.”

Mr. Issa also asked Mrs. Clinton, “Does the agency require employees to certify on a periodic basis or at the end of their employment with the agency they have turned over any communications involving official business that they have sent or received using nonofficial accounts?”

Mr. Issa’s letter also sought written documentation of the department’s policies for the use of personal email for government business. Mrs. Clinton left the State Department on Feb. 1, 2013, seven weeks after the letter was sent to her.


The Office of the Director of National Intelligence (DNI) released a handful of sensitive documents Thursday morning dealing with terrorism suspect Anwar al-Awlaki and the terrorist attacks in Benghazi, Libya.

The Christmas Eve document dump includes 16 pages of heavily blacked-out emails about the events surrounding the 2012 terrorist attack on a U.S. diplomatic compound in Benghazi that killed four Americans.

The DNI emails about Benghazi are heavily redacted and appear to contain little new information. Several of the emails discuss the drafting of an assessment of the threat level ahead of the attack, which was being prepared for Congress in the months after four Americans were killed in the attack.

Other emails include periodic press clippings about the state of Benghazi in the years after the incident, which were meant to give staffers “situational awareness.”

Another document released Thursday is a memo to the State Department that shows the DNI signed off on a proposal to revoke al-Awlaki's U.S. passport about seven and a half months before he was killed by the U.S. in a 2011 drone strike in Yemen.

While al-Awlaki will not be missed, I think that having the administration assassinating American citizens abroad without judicial review is a really bad precedent. We know Obama and Hillary consider Republicans greater enemies than the Islamic terrorists.

Not being able to make it on her own, Hillary is bringing out the big dog: Looks like Bill Clinton is going to take a larger role in Hillary campaign


It looks like Hillary Clinton’s campaign is turning into a real family affair, as both Chelsea and Bill Clinton are now getting more involved. The younger Clinton’s entry into the campaign isn’t a real surprise, because it’s been known for several weeks she’d start headlining events in January. But it looks like Hillary Clinton is really hoping Bill Clinton will put her over the top in states like Iowa and South Carolina because she considers him a “secret weapon.” Via The Wall Street Journal.


Mr. Clinton is a revered figure in Democratic circles and was a key surrogate for Mr. Obama in his 2012 re-election bid. A survey conducted in part by The Wall Street Journal last year said he was by a margin of more than 2 to 1 the most admired president of the past quarter century.
Marc Lasry, a friend of Mr. Clinton’s and head of New York hedge fund firm Avenue Capital Group, said: “President Clinton campaigning for Hillary is a huge asset. People love seeing him and he’s able to explain things to people in a way that’s unique.”


Bill Clinton’s popularity is no joke, he does know how to play a room and get along with everyone. One thing screenwriter Mark Hughes wrote at Quora is how Clinton uses his charisma to make people feel important (or manipulate them) to get done what he thinks needs to get done. Clinton is a smart guy, even if his personal history and political stances are questionable at best (and that’s being way too nice). The way he made President Barack Obama basically walk off the podium in 2010 shows how he’s able to take over a news conference and draw people in. Even Politico noted Obama was completely outmatched by Bill Clinton’s presence.

I guess presidential campaigns call for heavy lifting that women just can't do. . .
Posted by Fritz at 11:57 AM