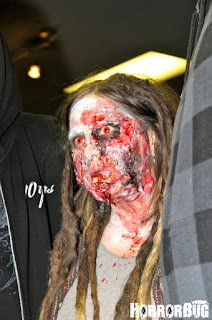 They are the closest thing to a Romero type zombie disease. They turn you into a mean spirited, dull witted shambling hulk, emitting various highly infectious fluids, capable of inflicting the syndrome on fellow humans with a touch, a breath, a cough or a sneeze. The only good part is that you don't hunger for brains (merely sweet things and hot liquids) and it's usually over with no further ill effects in a week or so.

Georgia and I both came down with colds on Monday this week. We think we acquired this on Christmas day at dinner with friends. One of them had a bad cold, and although we maintained all the proper precautions, it seems likely that the virus jumped to us.

On Sunday night, we both remarked on mild sore throats, but by Monday morning it was clear that some virus or another was making us its host, and since then our symptoms have progressed more or less in parallel, runny noses, then coughs which have gotten deeper and more croup like. Neither of us are experiencing any remarkable aches or pains, just a general malaise and lack of energy. Skye II is very resentful that we don't want to get out more.

We have stopped going to exercise, more to avoid infecting everyone else that because of the lack of energy, but I can't say that didn't make the decision easier.

The common cold is no common virus, rather it is the symptoms of a large number of different viruses (the plural viri or virii are the result of in incorrect interpretation of Latin):


The most commonly implicated virus is a rhinovirus (30%–80%), a type of picornavirus with 99 known serotypes. Other commonly implicated viruses include human coronavirus (≈15%), influenza viruses (10%–15%), adenoviruses (5%),human respiratory syncytial virus, enteroviruses other than rhinoviruses, and metapneumovirus. Frequently more than one virus is present. In total over 200 different viral types are associated with colds.

This explains why one person can get "the cold" over and over. Even with full immunity to the viruses you previously suffered through (not always true), there are plenty more to go around, and once the population "herd" immunity drops below some critical level, it can propagate through the population again. It also explains why kids get so many more colds than adults (other than their disgusting hygiene); they simply aren't immune to a lifetime's worth of colds.

How do you catch a cold?


The common cold virus is typically transmitted via airborne droplets (aerosols), direct contact with infected nasal secretions, or fomites (contaminated objects). Which of these routes is of primary importance has not been determined; however, hand-to-hand and hand-to-surface-to-hand contact seems of more importance than transmission via aerosols. The viruses may survive for prolonged periods in the environment (over 18 hours for rhinoviruses) and can be picked up by people's hands and subsequently carried to their eyes or nose where infection occurs.

So, basically, anything you touch that a zombie another sick person has touched can give you a cold. Strict hygiene and hand washing can help, but it's damned hard to keep that up 100%. If Romero style zombies spread that easily, zombie movies would be about 10 minutes long.

Was your Mom right; should you wear warm clothes outside to avoid a cold?


The traditional folk theory is that a cold can be "caught" by prolonged exposure to cold weather such as rain or winter conditions, which is how the disease got its name. Some of the viruses that cause the common colds are seasonal, occurring more frequently during cold or wet weather. The reason for the seasonality has not been conclusively determined. This may occur due to cold-induced changes in the respiratory system, decreased immune response, and low humidity increasing viral transmission rates, perhaps due to dry air allowing small viral droplets to disperse farther and stay in the air longer.

It may be due to social factors, such as people spending more time indoors, near an infected person,  and specifically children at school. There is some controversy over the role of low body temperature as a risk factor for the common cold; the majority of the evidence suggests that it may result in greater susceptibility to infection

So, while she may have had a point, going outside was probably better for you, just because of diminished exposure to sick people. Half a point to Mom.

Are there any other ways to avoid a cold?


Zinc supplements may help to reduce the prevalence of colds. Routine vitamin C supplements do not reduce the risk or severity of the common cold, though they may reduce its duration. Gargling with water was found useful in one small trial.

I'm a trace metal biologist/chemist, and I'm not convinced by zinc. What does that tell you?

So, you have a cold. What can you do but wait it out? I'm afraid the news isn't too good.

No medications or herbal remedies have been conclusively demonstrated to shorten the duration of infection. Treatment thus comprises symptomatic relief. Getting plenty of rest, drinking fluids to maintain hydration, and gargling with warm salt water are reasonable conservative measures. Much of the benefit from treatment is, however, attributed to the placebo effect.

If you think they help you, they probably aren't doing much harm.


Treatments that help alleviate symptoms include simple analgesics and antipyretics such as ibuprofen  and acetaminophen/paracetamol. Evidence does not show that cough medicines are any more effective than simple analgesics and they are not recommended for use in children due to a lack of evidence supporting effectiveness and the potential for harm.  In 2009, Canada restricted the use of over-the-counter cough and cold medication in children six years and under due to concerns regarding risks and unproven benefits. In adults there is insufficient evidence to support the use of cough medications. The misuse of dextromethorphan (an over-the-counter cough medicine) has led to its ban in a number of countries.

Those shelves lined with cold treatments? Mostly a waste of money.


In adults antihistamines may improve symptoms in the first day or two; however, there is no longer-term benefit and they have adverse effects such as drowsiness.

Drowsiness is an adverse affect? Sleeping is one way to pass the time. . .


Other decongestants such as pseudoephedrine are effective in adults. Ipratropium nasal spray may reduce the symptoms of a runny nose but has little effect on stuffiness.
Due to lack of studies, it is not known whether increased fluid intake improves symptoms or shortens respiratory illness, and there is a similar lack of data for the use of heated humidified air. One study has found chest vapor rub to provide some relief of nocturnal cough, congestion, and sleep difficulty.

So you go the doctor for some antibiotics, right?


Antibiotics have no effect against viral infections or against the viruses that cause the common cold.  Due to their side effects, antibiotics cause overall harm but are still frequently prescribed. Some of the reasons that antibiotics are so commonly prescribed include people's expectations for them, physicians' desire to help, and the difficulty in excluding complications that may be amenable to antibiotics. There are no effective antiviral drugs for the common cold even though some preliminary research has shown benefits.

Mostly a waste of doctor's time, your (or your insurance companies) money, and risking the rest of the world with possible increased antibiotic resistance. But once in a while you might stave off a nasty secondary bacteria infection.


While there are many alternative treatments used for the common cold, there is insufficient scientific evidence to support the use of most.  As of 2010 there is insufficient evidence to recommend for or against honey. As of 2015 there is tentative evidence to support nasal irrigation.  Zinc has been used to treat symptoms, with studies suggesting that zinc, if taken within 24 hours of the onset of symptoms, reduces the duration and severity of the common cold in otherwise healthy people. Due to wide differences between the studies, further research may be needed to determine how and when zinc may be effective. Whereas zinc lozenges may produce side effects, there is only a weak rationale for physicians to recommend zinc for the treatment of the common cold. Some zinc remedies directly applied to the inside of the nose have led to the loss of the sense of smell.

Georgia is a believer in the zinc hypothesis, and did a full course of zinc lozenges over the first three days. I gave up after a few the first day. Our colds are still progressing in parallel. I worry about the loss of smell side affect.


Vitamin C's effect on the common cold, while extensively researched, is disappointing, except in limited circumstances: specifically, individuals exercising vigorously in cold environments. There is no firm evidence that Echinacea products provide any meaningful benefit in treating or preventing colds. It is unknown if garlic is effective. A single trial of vitamin D did not find benefit.

If you eat enough garlic, you won't be around enough people to get sick, right? Unless they're Italian (or maybe Chinese).

So, once you have your cold, you might as well stick around home to avoid infecting others, stay hydrated (does liquor count?), bundle up, and binge watch something on TV until it goes away.
Posted by Fritz at 11:15 AM

Email ThisBlogThis!Share to TwitterShare to FacebookShare to Pinterest
Labels: disease, Georgia, Me, zombies