A Week's Worth of Obamacare Schadenfreude

An impressive build up for such a short time, but not like the glory days

If only someone had warned them: 2 million jobs' worth of hours lost under ObamaCare


ObamaCare will force a reduction in American work hours — the equivalent of 2 million jobs over the next decade, Congress’s nonpartisan scorekeeper said Monday.

The total workforce will shrink by just under 1 percent as a result of changes in worker participation because of the new coverage expansions, mandates and changes in tax rates, according to a 22-page report released by the Congressional Budget Office (CBO).

“Some people would choose to work fewer hours; others would leave the labor force entirely or remain unemployed for longer than they otherwise would,” the agency said in its latest analysis of the now five-year-old law.

But I guess that's only bad if you want a productive society.


In 2010, when Obamacare was passed, the Congressional Budget Office projected that the law would reduce the number of uninsured in 2014 by 19 million, relative to the number of people without health insurance in 2010. By 2016, CBO estimated that 30 million fewer people would be uninsured. 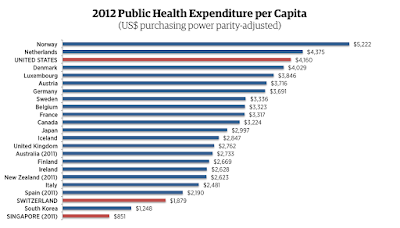 A group of economists and statisticians at CMS described the 2014 health expenditure data last week in Health Affairs. The growth rate of national health spending in 2014 was 5.3%, they found: the highest rate since 2007. “The return to faster growth,” they wrote, “was largely influenced by the coverage expansions of the Affordable Care Act.”

Spending growth was up across the board: in private health insurance (4.4%), in Medicare (5.5%), and especially in Medicaid (11.0%), which Obamacare significantly expanded.

In 2014, U.S. government spending on health care neared $1.4 trillion. That’s over $4,500 for every man, woman and child in the country: far more than we would ever need to achieve universal coverage in a rational, market-based system.

Will Obamacare put YOUR doctor out of business next?


The Democrats are continuing to stick Americans with bills for Obamacare – only this time, it’s the hospitals and doctors who are sweating. Quick background on this: as most of you know, the Obamacare nonprofit co-ops are largely living up to the adjective, if you define ‘nonprofit’ as ‘literally burning money in a pile on the ground.’ They’re collapsing left and more-left*; and the bankrupt ones are running into the problem that, well, they have no money, which means that they can’t pay their bills. Tautological, nu?
. . .
This is the important thing to understand: hospitals and doctors are in trouble right now because of the Democrats. The Democrats decided to shove socialized medicine down all our throats. Not the Republicans. The Democrats decided to bribe insurers and prop up the entire rotten co-op system with a permanent ‘temporary subsidy.’ Not the Republicans. The Democrats decided to lie about how finally stable the whole thing is. Not the Republicans.

I have no intention of taking any blame, either individually or collectively, for this debacle. Blaming the Republicans for our horrid crime of insisting we don’t spend money that we don’t actually have is like blaming the surgeon for the gangrene. Cleaning this mess up is, in fact, going to be as painful as all get-out. That’s why we fought Obamacare until the final black-out. We knew that it was going to fall apart. This was all inevitable, and none of us wanted any part of it.

Maine's Community Health Options lost more than $17 million in the first nine months of this year, after making $10.9 million in the same period last year. A spokesman said higher-than-expected medical costs have hurt the cooperative.

The announcement casts further doubt on the future of the cooperatives, small nonprofit insurers devised during the ACA's creation to inject competition in insurance markets. These co-ops immediately struggled to build their businesses. A dozen of the 23 created have already folded.


“California was once known as a pioneer for spearheading alternatives to confining people with developmental disabilities in state-run institutions that were notoriously overcrowded and separated patients from their loved ones,” but that progress is in danger of disappearing because the state is cutting back their spending on these programs.

Now, “more than $1 billion in state budget cuts threaten the system. In a grimly-titled report, On the Brink of Collapse, the Association of Regional Center Agencies (ARCA) noted that state has the lowest funding in the country for individuals with a developmental disability who qualify for services.”

Ronke Sodipo, director of community services at the Regional Center of the East Bay said, “Recent changes in labor laws have exacerbated funding issues for the scores of organizations that provide services.” California’s new law that requires paid sick leave, “the Affordable Care Act requirement that employers with more than 50 full time employees provide health insurance; an increase in overtime pay; and the higher minimum wage in Oakland and Emeryville have all created additional costs for the organizations.”

Yes, Obamacare is making it more expensive and harder for community service organizations to survive and the most vulnerable people they serve are losing the care they need.

This is even more egregious when you consider that those who benefit most from Medicaid expansion under Obamacare are able-bodied, childless adults, who can and should be working and buying their own insurance – and those who are hurt are truly in need of the help.

Children are being hurt too.


The work activity center at The Arc of Alameda in Union City is just one of the programs in the Bay Area that will be shutting down over the next few months because of funding issues. Luter also plans to close a child care program in Hayward, where he said deficits have run from $40,000 to $100,000 per year since 2010. The center serves children ages 2 to 5 with mild to moderate disabilities or developmental delays.

Innocent children and disabled adults are shut out in favor of the new recipients of Obamacare’s Medicaid expansion. Adherence to liberal ideology is hurting the poor and disabled, leaving them and their families with nowhere to turn.

But it's good because the "right people" are making money:


OBAMA’S HHS GAVE A SWEETHEART DEAL to a medical analytics firm owned by a company that had to settle a health data fraud case brought against it by the New York Attorney General for $400 million. Can you guess what the sole-source, five-year, open-ended “Blanket Purchase Agreement” is buying for the Obamacare program from the lucky firm? If you said health data – including an undetermined amount from the database used in the New York fraud – you get the gold ribbon.

Oh, and did I mention that Andy Slavitt, Obama’s nominee as Administrator of the Centers for Medicare and Medicaid (which runs Obamacare), is a former top executive with firm at the heart of the fraud? Maybe that’s why he got an unusual ethics waiver from the Obama administration that allows him to participate in decisions affecting his former employer? Just saying ….

And one more thing: Not only does the contract’s renewal not have to be made public, according to federal procurement regulations, nobody knows how much the deal is worth because there’s no dollar amount affixed to it. Okay, that was two things.

Obamacare repeal bill offers something for everyone on Capitol Hill


Indeed, there was something for everyone in Republicans’ successful effort last week to finally dispatch a health care repeal bill to President Obama’s desk.

The fast-track legislation, which passed on a 52-47 vote near party lines, would dismantle Obamacare and strip federal funding from Planned Parenthood for one year in the wake of videos showing organization officials negotiating sales of fetal body parts, raising the stakes for Republican incumbents who might worry that women would have to scramble for non-abortion services.

Everyone knew the bill was doomed by Mr. Obama’s veto pledge and was purely a messaging vehicle ahead of pivotal elections. . .