Study: hyperbole is increasing in science

Scientists have become more upbeat in describing their research, an analysis of papers in the PubMed database suggests.

Researchers at the University Medical Center Utrecht in the Netherlands say that the frequency of positive-sounding words such as ‘novel’, ‘amazing’, ‘innovative’ and ‘unprecedented’ has increased almost nine-fold in the titles and abstracts of papers published between 1974 and 2014. There has also been a smaller — yet still statistically significant — rise in the frequency of negative words, such as ‘disappointing’ and ‘pessimistic’. 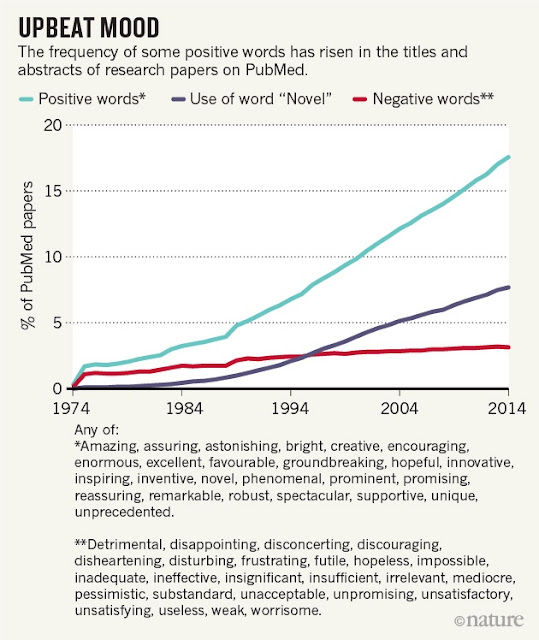 While the study is only in the life sciences and biomedical literature, I certainly observed the same thing happen in the environmental field. The more people competing for limited resources, the more outlandish the claims need to be to rise above the hum.

BTW, the word bombastic comes from Philippus Aureolus Theophrastus Bombastus Von Hohenheim, known more succinctly by the name he chose himself, Paracelsus (above or beyond Celsus). He wasn't exactly a shrinking violet when it came to claims of importance. He did, however, contribute greatly to the conversion of alchemy to chemistry and the modernization of medicine.
Posted by Fritz at 5:00 AM