I already have a canine companion, and I don't think she would do well with a fox: Meet Your New Pet, A Domesticated Fox

Dogs have been evolving as human companions for at least about 14,000 years. Cats have lived with us for 12,000. But if you want something a little more cutting edge—and you’re willing to pay up— a pet fox might be just the thing.

Domestication started just 55 years ago, but because Russian geneticists methodically bred just the friendliest foxes, a handful of charming, domesticated and trainable foxes are available today.

While foxes are the most common carnivore in the wild, this new pseudo-breed is one of the rarest domesticated animals in the world, with only a hundred or so in existence, all of them bred from animals in Russia. Importing a fox currently costs about $9,000.

But the money isn’t going to a kind of fox puppy mill: That hefty sum supports science and rescues the sweet animal (which looks like a cross between a wolf and the fluffy Shiba Inu but only weighs about 10 pounds.) 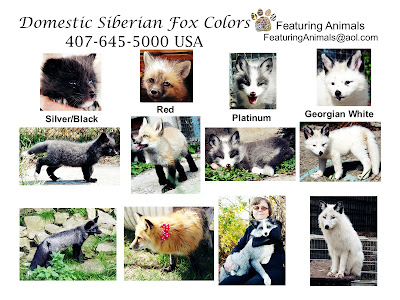 The whole project to domesticate foxes started in 1959 on a scientific outpost near Kazakhstan where geneticist Dmitry Belyaev wanted to see how quickly humans could tame a species by breeding on behavior alone. In what became one of the most famous biological experiments of the 20th century, Belyaev showed the world showed that domestication—and by extension, evolution—could work faster than anyone imagined.

Belyaev started with a population of fur farm foxes and chose the friendliest 10%—the 130 animals that were rated the least likely to attack or run from people. Within four generations, some foxes were wagging tails. By generation six, 1.8% were deemed the "elite of domestication"; they eagerly sought human friends. By generation 10, it was 18% and by 20 it was double that. Curiously, the friendly gene came attached to some other physical genes that made the foxes look like other domestic animals: curly tails, white faces, droopy ears. It took only about 35 years to completely domesticate the species.

But long-term science is hard to pay for, so the Russians are selling some of the "best" foxes for money to run the program.