A short roundup of the recent happenings at Clinton.com: 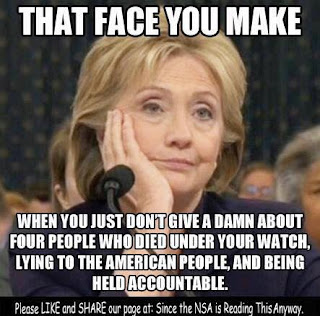 Clinton Emails: It Looks Like She Was An Architect Of The Benghazi Lie

On Sept. 16, 2012, U.S. Ambassador to the United Nations Susan Rice went on five Sunday TV news shows to explain why a few days earlier attacks on U.S. State Department facilities in Benghazi, Libya, killed four Americans, including our ambassador. It was all just a demonstration provoked by an Internet video that got out of hand, Rice said.

It was a cover-up, of course. Rice was pushing in a re-election year a fiction that the administration believed would do the least amount of damage to President Obama's campaign. The administration couldn't allow itself to admit that things were going poorly in the Middle East after it had been saying progress was being made.

Clinton herself went with the story even though she knew it wasn't true. But was she merely a cog in the conspiracy to cover up the truth, or one of its planners?

An email from a batch released Monday strongly suggests she was an architect.

Her schedule, the Washington Examiner has reported, shows that Clinton met with Rice in Clinton's office from 9:30 a.m. to 10 a.m. on Sept. 14, 2012 — two days before Rice misled the American people.

The emailed schedule shows only that a meeting with Rice was planned. No subject was referenced. But a previously released Sept. 14, 2012, email that White House aide Ben Rhodes sent to several high-ranking administration staffers had the subject line: "RE: PREP Call with Susan: Saturday at 4:00 p.m. ET."

At that prep session, Rice was told "to underscore that these protests are rooted in an Internet video, and not a broader failure of policy."

The fog of politics. 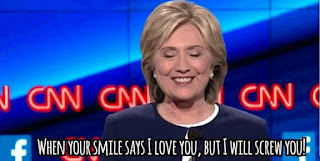 
Communications involving Elise Labott — a foreign affairs correspondent at the well known news outlet — turned up in the most recent cache of Hillary Clinton’s infamous emails released by the State Department. From the emails, it can be surmised that Labott coordinated Twitter posts with a top Clinton aide during the former secretary of state’s January, 2013 Senate testimony about the Benghazi attacks.

The CNN reporter also appears to have coordinated with Reines to post a favorable quote from Clinton’s testimony.
. . .
Things got even more suspicious after that, when Reines then told Labott that he had “suggested a good Tweet.” After the reporter responded that she had not received any such email, Reines wrote back “Pin,” in an apparent reference to a private messaging system, to which Labott responded “will get back to you.” Eleven minutes later she sent an email stating, “done.” 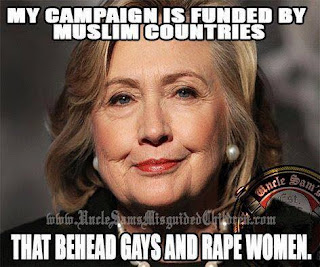 Hillary’s ISIS strategy is just as lame as Obama’s


Poor Hillary Clinton: She wants desperately to distance herself from President Obama when it comes to fighting ISIS. Yet her approach is every bit as lame as the one that’s driven his polls through the floor — because it’s almost exactly the same.
. . .
For instance, Clinton:


Hillary Clinton once said that illegal immigrants should not be included in any proposed health care reform. Now that Obamacare is the law of the land she’s singing a different tune. Here’s the exchange between Clinton and George Stephanopoulos. (Video is below.)


STEPHANOPOULOS: “Immigration going to be a big issue in this campaign? In the past, you’ve said that undocumented immigrants would not be covered by your health care proposals. Here’s an exchange we had in 2007.”

STEPHANOPOULOS: “Now you say that undocumented immigrants should be able to buy into the exchanges. So why the shift?”
CLINTON: “Well, because number one the kind of plan that was passed in the Affordable Care Act gives you a market-based way of getting into the insurance market. So, if you can afford to buy a policy, you can. You don’t get, however, any of the subsidies that American citizens get.”
STEPHANOPOULOS: “Martin O’Malley says they should. Why not?”
CLINTON: “Well, I disagree with him. I think part of comprehensive immigration reform should be looking at all of these issues. But as things stand right now, under the Affordable Care Act, if you have the money and you are undocumented, you can buy into it, but without the subsidies. That’s why it’s important we continue to support community health centers, we continue to support our hospitals because those are often the places that undocumented people and poor people go.”
STEPHANOPOULOS: “And what’s the reason for not going further?”
CLINTON: “Because I don’t think legally you can. I mean, that is not something that we can legally support. The law is very clear about that.”

She says now that they shouldn’t receive subsidies, but why should we believe her when it wasn’t that long ago she said they shouldn’t participate at all. What’s to stop illegals who do sign up for coverage from suing to get subsidies. Who can say that illegals who sign up aren’t just given subsidies automatically by the inept bureaucrats in charge of these things? Their track record is pretty bad so that’s entirely within the realm of possibility.

Democrats are pretty unhappy with the current electorate, and hope to replace, or at least dilute it substantially with people who owe them.

How big is Hillary’s “Rahm problem” now? - I don't know, is it big enough that the dead of Chicago won't rise to vote for her? Related from Instapundit: RON FOURNIER: The Fish Rots From The Head In Chicago: Why aren’t President Obama and Hillary Clinton demanding Rahm Emanuel’s head? Because he knows where the bodies are buried.


The Hillary Clinton campaign is out with an ad highlighting her record as an advocate for LGBT rights. The spot includes images of gay couples kissing each other.

The liberal website Slate praises Clinton for including same-sex kissing in her campaign ad, saying, “Given the distressingly puritanical rules that govern gay PDAs, it’s both impressive and heartening that Clinton includes gay kisses in her official campaign spots.”

“The ad forces viewers to confront images that might make them feel slightly uneasy, then encourages them to view such affection as a normal, healthy manifestation of adult intimacy.”

The Slate writer complains that, “it is a depressing but incontestable fact that most straight people—including many LGBT allies—are uncomfortable with the sight of same-sex kisses. Some straight people defend their disgust by pretending to be repulsed by all public kissing.”

In the ad, Clinton says that she’s “running for president to stand up for the fundamental rights for LGBT Americans and all Americans.”

At least she chose hot lesbians, not the more typical fat, flanneled variety. Oh wait, she got them in too: 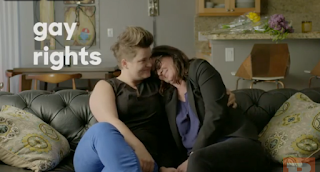 However, Clinton has had a shaky record when it comes to same-sex marriage. In 2010 the State Department changed the passport application forms from “Mother” and “Father” to “Parent 1″ and “Parent 2,” in order to accommodate and recognize same-sex parents.

Emails released by the State Department show that then-Secretary of State Hillary was furious over the decision to give out gay-friendly passports. She sent an angry email to a staffer saying she wouldn’t defend the decision, “which I disagree w and knew nothing about, in front of this Congress.”

It was also reported that in 2000, then-President Bill Clinton told historian Taylor Branch that Hillary experienced “discomfort” around “gay people who were king of acting out.” He told the historian that Hillary was, “a little put off by some of this stuff” and found gay rights “harder to swallow.”

Clinton did not come out in favor of same-sex marriage until 2013.

It's funny how fast things on the liberal agenda go from "No, we'd never have that" to "You're a bigot for opposing us."

And Hillary supporter for lowering America's standards of living:

Sadly, they get to vote.

And just for fun:

Wombat-socho has the weekly giant mother of all Rule 5 posts: "Rule 5 Sunday: Farewell To The Slave Princess" ready for perusing at The Other McCain.
Posted by Fritz at 8:32 AM