Forgive me readers, for I have sinned, in not getting some of this out earlier. This promises to be a long one, so let's get after it:


Officials with the Democratic National Committee have accused the presidential campaign of Sen. Bernie Sanders of improperly accessing confidential voter information gathered by the rival campaign of Hillary Clinton, according to several party officials.

Jeff Weaver, the Vermont senator’s campaign manager, acknowledged that a staffer had viewed the information but blamed a software vendor hired by the DNC for a glitch that allowed access. Weaver said one Sanders staffer was fired over the incident.

The discovery sparked alarm at the DNC, which promptly shut off the Sanders campaign’s access to the strategically crucial list of likely Democratic voters.

The DNC maintains the master list and rents it to national and state campaigns, which then add their own, proprietary information gathered by field workers and volunteers. Firewalls are supposed to prevent campaigns from viewing data gathered by their rivals.

Sander's who really has no intention of being elected, or even running for President, apologized profusely. 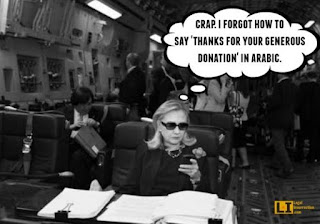 The Clinton.com email scandal continues to ferment, with proof that the State Department specifically warned Sec. Clinton against using a Blackberry over security concerns:


Based on the result of winning another FIOA case, Judicial Watch received more than 50 emails, many marked “sensitive,” revealing the internal State Department debate about the use of Blackberries by Ms. Clinton and her Staff. The debate included a 2009 internal memo from the Assistant Secretary for Diplomatic Security that warned of “vulnerabilities and risks” of Blackberries in executive suites.

And of course we know from the famous pictures like the one above, not only did Ms. Clinton ignore the warning by using her Blackberry in the executive offices, but she used it outside the friendly confines of “Foggy Bottom” also (back in August it was revealed that like her email, Hillary’s Blackberry was not secured).

The key document is a March 2, 2009, internal memorandum from Assistant Secretary for Diplomatic Security Eric Boswell (page 3 of the embedded docs below) entitled, “Use of Blackberries on Mahogany Row [govt. slang for the senior executive floor]”

In that March 2009 memo, Boswell strongly advised that blackberry devices not be allowed, especially for senior staff. Sent to Clinton and her Chief of Staff Cheryl Mills, the memo explains “the vulnerabilities and risks associated with the use of Blackberries in Mahogany Row considerably outweigh their convenience.” 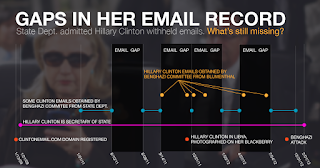 
As first reported by The Washington Post, the Clintons paid Pagliano $5,000 for "computer services" prior to his joining the State Department, according to a financial disclosure form he filed in April 2009.

Yet, even after arriving at State in May 2009, Pagliano continued to be paid by the Clintons to maintain the non-secure homebrew server, which was located in a bathroom closet inside the Clinton's Chappaqua home.

As part of invoking his Fifth Amendment right, Pagliano is also invoking the so-called act-of-production privilege. Since 1984, according to a review by Fox News, the privilege has been used in 103 federal or state cases.

This assertion is tantamount to the defendant's testimony that the documents exist, are authentic and are in his possession.


The privilege has been invoked before by a Clinton associate. Webb Hubbell, Hillary Clinton's former law partner when she worked at the Rose Law Firm in Arkansas, argued for an "act-of-production privilege" during the federal investigation into the collapse of Madison Guaranty, a failed savings and loan. Hubbell followed Bill and Hillary Clinton into the White House to become an associate attorney general, the third-ranking member of the Justice Department. He was convicted in 1995 and served 18 months in federal prison for his role in the failure of that savings and loan which later became known as the "Whitewater scandal."

Why, it's almost like Clinton.com put it's privacy and convenience over the security of the country or something. 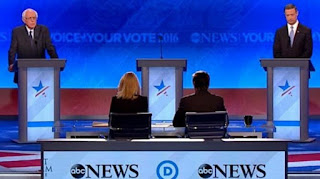 We all know that Ms. Clinton was late for her return to the stage in the last Democrat Presidential debate. But do we know why?


Democratic presidential frontrunner Hillary Clinton was late getting back to the debate stage Saturday night because she didn’t want to share a restroom with a Martin O’Malley staffer.

As Breitbart News immediately reported during the debate, the ABC telecast came back from a commercial break with an empty Clinton podium. Clinton went back out onstage, said “Sorry,” and did not explain her absence. The mystery grew: Where was Hillary?

Clinton reportedly went to the ladies’ room during the commercial break, according to The Boston Globe. Clinton even had a campaign employee on bathroom duty to make sure Clinton could quickly get inside the restroom and return to the stage. But when that staffer let in O’Malley spokeswoman Lis Smith, Clinton waited outside.

Why would Clinton not share a restroom with Smith?

I'm going to guess Depends, maybe a colostomy bag, or an attached insulin pump. Maybe things we should know about before electing her.

During the debate Hillary made the claim that ISIS is using Donald Trump in recruiting videos. Of course, anything is possible, but there's no evidence for that:


During a Democratic presidential debate in New Hampshire, Hillary Clinton took a shot at Republican primary frontrunner Donald Trump, saying that his rhetoric is a gift to ISIS.

"We also need to make sure that the really discriminatory messages that Trump is sending around the world don't fall on receptive ears," Clinton said during the debate. "He is becoming ISIS's best recruiter. They are going to people showing videos of Donald Trump insulting Islam and Muslims in order to recruit more radical jihadists."

Not having heard that before, our eyebrows went up when we heard Clinton’s comment, and we weren’t alone. The Twittersphere, on both the right and the left, picked up on Clinton’s statement and questioned whether she had any evidence for it.

Extensive Google searches did not turn up any evidence. And the response from the Clinton campaign did not point to any specific videos.

The campaign pointed to an NBC News article that quoted Rita Katz of the SITE Intelligence Group, which monitors the social media activities of Islamic terrorist groups.

"They love him from the sense that he is supporting their rhetoric," she said. "They follow everything Donald Trump says. When he says, 'No Muslims should be allowed in America,' they tell people, 'We told you America hates Muslims and here is proof.' "

The article also quoted David Phillips, director of the Program on Peace-Building and Rights at Columbia University's Institute for the Study of Human Rights, saying that "Trump's incendiary anti-Muslim comments will surely be used by ISIS social media to demonize the United States and attract recruits to fight in Iraq and Syria."

But while such quotes support the notion that ISIS could be making recruiting videos, or will do so, they do not support Clinton’s contention -- offered in the present tense -- that they are currently doing so.

Vox.com tweeted at J.M. Berger, author of the book ISIS: The State of Terror, and Berger tweeted back, "I would be surprised if they had and we didn't hear about it in a big way."

For now, it seems that Clinton has turned speculative left-of-center rhetoric into fact.

But we do know a few people who starred in ISIS recruiting videos, and they include Barack H. Obama, and Slick Willie Clinton:

Not that there's anything wrong with pissing off ISIS. 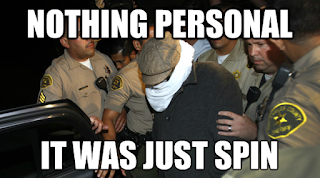 But Hillary won't apologize for the latest  lie about a video: Hillary Clinton’s latest lie about videos and terrorists


But her claim during Saturday’s Democratic debate that ISIS is “showing videos of Donald Trump insulting Islam and Muslims” in order to recruit jihadists is about as accurate as her claim an online anti-Muslim video sparked the 2012 Benghazi attack.

And a number of usually pro-Hillary fact-checkers agree: The Washington Post, the Associated Press and Politifact all branded her debate claim false.

But Team Clinton is refusing to apologize “for correctly pointing out how his hateful rhetoric only helps ISIS recruit.”

Problem is, that’s not what she said in the debate: Clinton specifically claimed ISIS recruiting videos of Trump exist. Yet no one — not even those who track terrorism — has heard of any, let alone seen one.

At least with Benghazi there was an actual video, though it played no role in the terrorist attack that killed four Americans, despite her claims to the victims’ families.

Ironically, her truth-stretching is much like what Trump himself was accused of when he claimed there was video showing “thousands” of Muslims cheering the 9/11 attacks in New Jersey.

No one’s found that video either — though there were a few instances of small groups welcoming the Twin Towers’ destruction, as an ex-police captain is now saying.


. . .The reason Herself cannot tell the truth about Trump and Islamic State recruiting is that the actual facts would undercut her case. Yes, Trump’s bluster, and the underlying policy ideas (“ideas”) that his bluster attempts to express, are certainly the sort of thing that might show up in an Islamic State video. But so is the U.S. Marine Corps. So are our drones. So is the Pentagon. “This is the sort of thing that enrages the terrorists” is a dumb line of analysis, because the terrorists tend to get most enraged about the instruments and processes that are most effective in the war against terror. There’s no doubt that taking a more rigorous approach to security at our borders and ports of entry would inconvenience and annoy the Islamic State — that’s a reason to do it, not a reason to refrain. Killing Osama bin Laden wasn’t terribly popular with the suicide-vest set, either.

If we want to have authentic democracy, then we have to insist that people in public life be truthful about the events and personalities of the real world. We have to tell the truth about the people who are running for president. We also have to tell the truth about bin Laden, Anwar al-Awlaki, Omar Abdel-Rahman, Timothy McVeigh, O. J. Simpson — and even Donald Trump.

And the Clinton touches on Lake Woebegone. . . Clinton plans to close half the nation's schools: Clinton: 'I Wouldn't Keep Any School Open That Wasn't Doing A Better Than Average Job'

Perhaps we need to impose a statistical literacy requirement on Presidential candidates?