Can the Redskins Re-Pluck the Eagles? 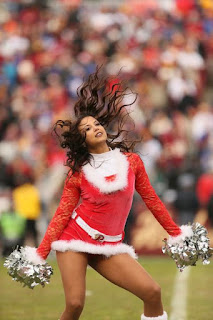 The 7 and 7 Redskins take on the 6 and 8 Eagles tonight at 8:30ish. They beat the Eagles back on Oct. 4, and tonight's game is crucial to any Redskins playoff hopes. The Washington Post is starting to say positive things about Kirk Cousins, so maybe a little skepticism is in order.

Eagles from the 20. Pass to the 38 for a first down. And then another at the Redskin's 45. Another first down. Then Redskins encroachment penalty. And then a pass to the end zone draws an interference call, and the Eagles make a TD from the 6 yard line. Kick is good, 7-0 Eagles. 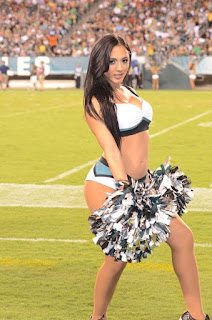 Meanwhile, there has been a major development in the Redskins name controversy. You may remember how the FTC (encouraged by public statements from Preznit Obama) decided to revoke the Redskins trademark rights on the name Redskins? A ruling in favor of an Asian rock band called "The Slants" puts the FTCs ruling in jeopardy, when U.S. Court of Appeals ruled that the government cannot ban trademarks just because it determines them to be offensive:


In a major decision that could bolster the Washington Redskins’ legal defense of its name, a federal appeals court said Tuesday that the U.S. government can’t ban offensive trademarks, arguing that the practice violates the First Amendment. 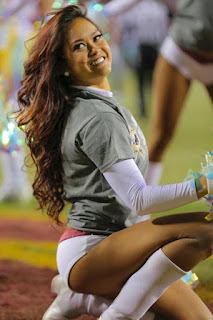 Redskins from the 20. They go three and out.


The ruling by the U.S. Court of Appeals for the Federal Circuit in Washington came in a case involving an Asian American rock band called the Slants. The U.S. Patent and Trademark Office had rejected a trademark for the Oregon-based musicians because it considered its name a slur. But the majority of the 12-judge court concluded that no matter how disparaging the band’s name may be to Asian Americans, the First Amendment still protects the musicians’ speech — “and the speech of other trademark holders.” 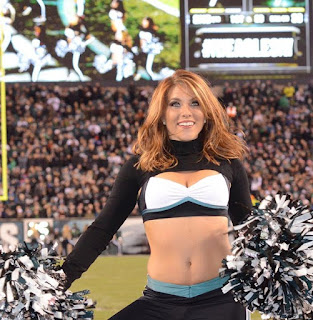 Redskins recover somewhere back around their 30. Cousins pass to the 44. Illegal formation backs it up to the 39. Jordan Reed catches a pass out to the Eagles 33.Pass to Jackson for another first at the 22.  Cousins pass to Jordan Reed in the end zone. Personal fouls offset after the play. Kick is wide. 7-6 Eagles.


The court’s decision is a significant boost to the Redskins in the team’s battle to defend its own trademark protections. In July, a federal judge in Alexandria ordered the cancellation of those trademarks — a decision the team is fighting. The judge had affirmed an earlier ruling by the Trademark Trial and Appeal Board that the NFL team’s name denigrated Native Americans and was therefore ineligible under the decades-old Lanham Act, which prohibits trademark protection for offensive names. 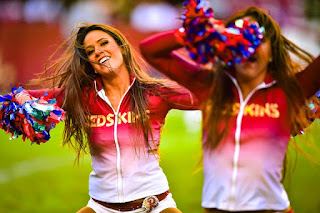 Eagles take the ball at their 15. Third down and 7. Bradford grounds before the sack. Eagles will punt from the 6.


“Whatever our personal feelings about the mark at issue here, or other disparaging marks, the First Amendment forbids government regulators to deny registration because they find the speech likely to offend others,” the court’s opinion said. “Even when speech “inflict[s] great pain,” our Constitution protects it “to ensure that we do not stifle public debate.” 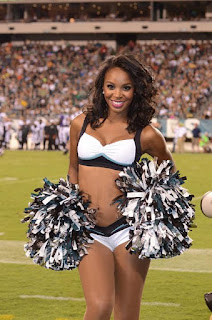 Crowder takes the punt at the Redskins 39. Pass to Jackson at the Eagles 46. Morris gets 4 yards. Cousins to Reed, first down at the 35. Morris again with 5. Incomplete to Garcon, deflected. Pass to Reed, down to the 12, first down. Pass to Reed, Reed fights into the end zone. Kick is good, 13-7 Redskins. 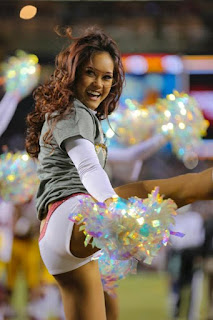 Eagles from the 20. Bradford to Matthews for a long gain. First down at the Redskins 35. End of the first quarter. Redskins 13-7. Bradford sacked and holding on Eagles.

Punt recovered at the 8 yard line. Backed up to the 3 by a penalty, Third and 9, two yards won't do, and the Redskins will have to punt.


“The Slants case ups the ante and makes it very likely the Supreme Court will take the case now that there’s been a declaration by a federal appeals court of unconstitutionality,” he said. “If there hadn’t been a Slants case, and the Redskins case had run its course in the appeals process and judges ruled the Lanham Act was constitutional, then it might not have ever gotten to the Supreme Court. Now it’s almost a guarantee the Supreme Court is going to take it.” 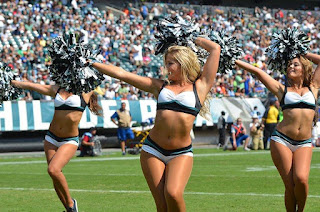 Punt recovered at the Eagles 39. Eagles going backward on penalties. First and 20. Third and 10. Pass is way long. Eagles punt recovered by the Redskins near their 10.

Pass to Garcon at the 23. First down. Cousins sacked back at the 9. Offensive holding declined. Fourth and long. Redskins punt recovered by the Eagles at their 42. Pass to Celek, first down. Another pass to Celek at the Redskins 27. Matthews to the 16. Eagles settle for a field goal Redskin 13 - Eagles 10. 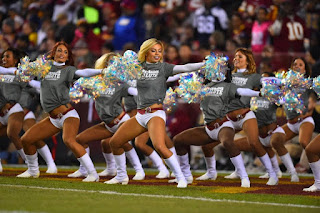 Ross takes it in the end zone, runs to the 25, but a holding call puts it back at the 7. Cousins throws it away on third and long. Punt stops rolling at the Eagles 38.

Washington recovers a fumble at the Eagles 40ish, but it will be ruled down before Breeland knocked it loose. Darn. 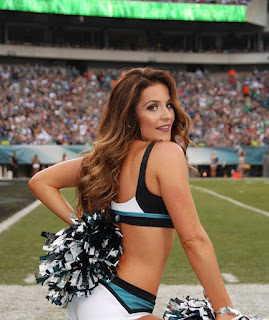 Nope! Ruling on the field stands! Morris for first down. Morris 8 yard gain for first down. Washington first down from the 10. Out of bound catch by Garcon. Second pass nearly intercepted by Jenkins. Third, incomplete to Garcon. Field goal by Hopkins is good. 16-10 Redskins.

Eagles take the knee in the end zone at 1:43 in the half. 8 yards on the second down, first down on the third, and take a time out. Bradford sacked by Smith for 7 yards. Time out Redskins, 3d and 17. Not enough. Redskins time out with 40 seconds. 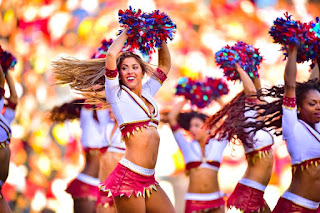 Eagles punt. 29 seconds at the 29 yard line. Cousins to Jackson at the sidelines. First down at the 49. Cousins to Garcon on the sidelines at the 26. Reed at the 10 with 10 seconds. Flag. Delay of game Eagles. Six seconds from the six yard line. Eagle time out. Flag. Ugly weird stuff. Half ends. That was a Cousins screw up. They should have had at least three if not seven.

Redskins take the second half kick off at the 20. Morris for one. Pass to Jordan Reed at the 35, first down. Cousins sacked for a bunch (7) on second and 10. Fourth and 5 brings a punt. 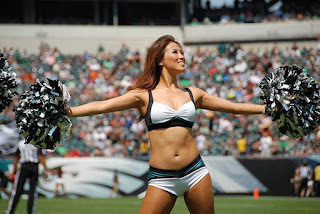 Eagles stopped at the 10 on the punt. A long pass out to the 50 looks almost caught, ruled incomplete, challenged. Challenge denied. Eagles lose a timeout. Second and 10. Matthews to the 15. Flag. Holding offense. From the 7 yard line. Not enough. Eagles punt. 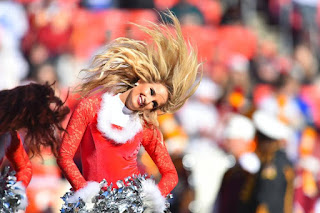 Crowder to the Eagles 45. First down Reed. Cousins almost throws an intercept to Watkins. On third and 10, 17 yards to Garcon. Pass stopped behind the line, 2nd and 14. To the end zone, too high. To Thomas for a first down at the 16.  Garcon to the 12. Eagles Kendricks knocks down a pass. TD pass to Garcon. Kick is good 23-10 Redskins. 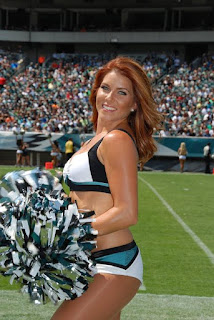 Eagles take the kickoff way out. A few quick plays and they end up at the Redskins 11. Third and 7. Washington offsides Kerrigan. Eagles Johnson drives it in for a touchdown. Kick is good 23-17 Redskins.

Eagles almost lose it to a fumble, but recover near their 20. Eagles grinding out. Third and 8. Eagles Murry fumbles, Redskins DeAnglo Hall recovers, touchdown, kick is good. 30 - 17 Redskins. 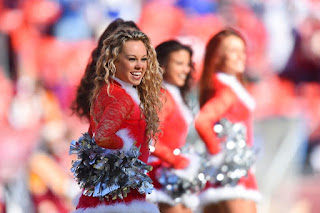 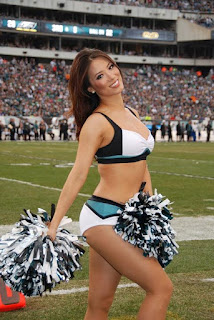 And the Redskins stall out the rest of the game.  Redskins win the NFC East and will go to the playoffs for the first time since 2012, RG III's rookie year.

Wombat-socho has the ginormous "Rule 5 Sunday: Happy New Year!" ready for browsing at The Other McCain.
Posted by Fritz at 8:32 PM