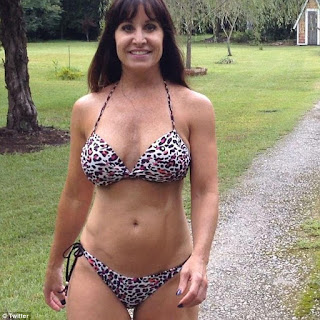 Meet the 49-year-old mom-of-two making $100,000 a year by sharing flirty videos of herself working on the family farm - while clad in a bikini


One 49-year-old woman is giving women half her age a run for their money - literally - by raking in a six figure salary simply by posting videos of herself in a bikini online.

Jennifer Saucier - who goes by Farm Girl Jen on YouTube - earns millions of views for her clips, most of which see her doing things like cuddling piglets and chopping wood around in her North Carolina home - while wearing nothing but a skimpy bikini.

And those views have now turned into cash, with the buxom mother-of-two making $100,000 a year for sharing her life - and her figure - online.

Jen and her husband Jason run the small farm in North Carolina. In 2012, Jen decided to start sharing videos of her life on her YouTube Channel, Banshee Moon - and in the years since, she has accumulated over 45,000 followers. 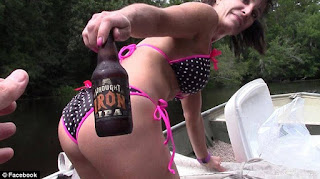 Nice figure, but kind of a "butterface," if you know what I mean. But I had this video of hers (below) standing by for use.


Having always been active, Jen enjoys finding inspired ways to keep fit on her farm.

Last summer, a video of Jen weight training with a tractor went viral, collecting more than 1.8 million views. Impressively, the she was able to drag the tractor along with brute strength.

But there's money to be made on the internet, if you have the right goods to sell. A friend of mine's 19 year old son just bought a Porsche 911 with cash he made off legitimate jewelry sales on the internet.

I'd say she's not much of a fisherman, but it's the captain's job to find the fish.

Wombat-socho rounds up the Rule 5 world with "Rule 5 Sunday: Pre-Christmas Shopping Frenzy Edition".
Posted by Fritz at 6:00 AM