The ink hasn’t yet dried on the UN climate accord and one of the territories most at risk from global warning is already demanding an opt-out.

“We still have the option of making a territorial opt-out to COP21," Kim Kielsen, the prime minister of Greenland, said during a visit to Copenhagen on Monday. "We have an emissions quota of 650,000 tonnes of CO2, which is the same as a single coal-fired power plant in Denmark, or a minor Danish city."

Kielsen oversees a self-governing territory within the Kingdom of Denmark. With a size roughly that of Mexico and a population that’s smaller than the Cayman Islands’, Greenland is the least densely populated country in the world. More than 22,000 people live in the capital Nuuk, while the remaining 34,000 are dispersed over an area of 2.2 million square kilometers. 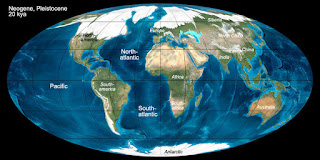 This is because, while glaciers are scenic and fun to observe occasionally, they make very poor neighbors, as civilization may well discover when the Pleistocene  decides to make its dominance over the Holocene known by sending continental glaciers out of the north to swallow most of Canada, and parts of northern USA, Europe and Asia.


As a result, the most common way for locals to traverse its icy expanses is via highly polluting planes.

"We want to solve that issue as we have considerably larger geographical distances to cover,” Kielsen said after a meeting with Danish Prime Minister Lars Loekke Rasmussen and their colleague from the Faroe Islands, another autonomous territory within the Kingdom of Denmark.

Rasmussen said Denmark would ratify the climate accord and allow Greenland and the Faroe Islands to make their own decision.

The Greenlanders may even have a strong case for global warming than Minnesotans: