Of course there's a catch, they were the daughters of Republican Senator Ted Cruz: 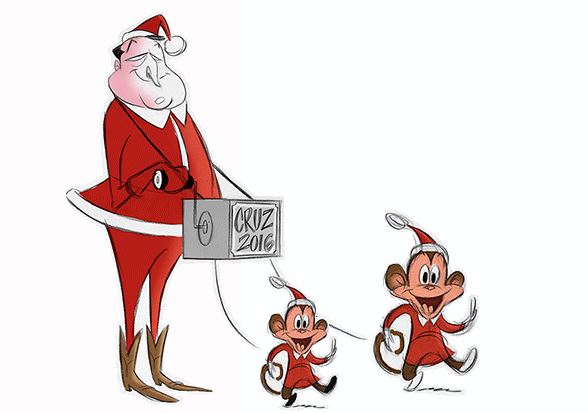 The artist, Ann Telnaes argues that the children are fair game because they have starred in a Cruz advertisement. Never mind that Obama's daughters were used in campaign ads as well, and a we all know what would happen if a cartoonist were to portray them as dancing monkeys.

Nothing to see here, folks!

After someone noticed, Fred Hiatt, WAPO editor, pulled the cartoon and left a note:


It’s generally been the policy of our editorial section to leave children out of it. I failed to look at this cartoon before it was published. I understand why Ann thought an exception to the policy was warranted in this case, but I do not agree.

Outrage; nobody does it better. Take it away Ace:


Pulled Down, Now With This Bullshit Explanation: "I Didn't Look At It."

I know you looked at it -- you seemed to have required her to write a defense of the cartoon in order to give it "context" and make it acceptable.

I am having a lot of trouble believing that a hot piece like this, so controversial the cartoonist had to pre-justify her own stupid doodle with a written explanation, gets past the editors without people taking a look-see.

I mean it's a frickin' cartoon. You know -- a scribbling for babies and illiterates. Who doesn't have the time to look at a doodle?

Anyway, it's gone, and here's some self-exculpating bullshit, which also seeks to exculpate the cartoonist.

He seems to be saying there's a good reason for Ann to think this was an "exception" -- because Cruz' kids were in a ad.

Okay, well Obama's kids were also in an ad -- would the liberal Fred Hiatt agree, or at least "understand," why people might think that also serves as a "warranted" "exception" to justify an attack on his kids?

Note my point is not to go after Obama's kids. I never go after his kids. I have no reason to do so.

But this liberal game of piously claim Democrats' children are completely off-limits, while concocting "warranted exceptions" for Republicans' kids (every Republicans' kids, pretty much -- ask the Bush Twins and Palin Kids), is infuriating beyond my capacity to express.

At the minimum, Talnaes must lose her position at the Washington Post.
Posted by Fritz at 8:49 AM