Who Wouldn't Want a Radical Lesbian Feminist Teaching Their Daughter About Sex?

From Stacy McCain: ‘Hi, We’re Lesbian Feminists and We’re Here to Talk to Your Daughter About Sex’

Carmen Rios (@c_rios) is a “raging lesbian feminist” who is (a) communications coordinator for the Feminist Majority Foundation, and (b) a columnist for the lesbian blog Autostraddle. 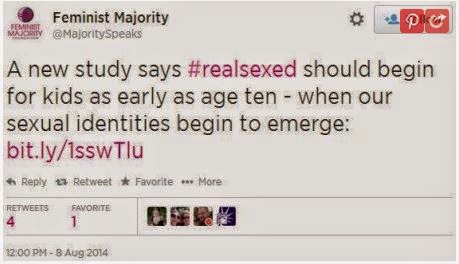 That message linked a blog post at the Feminist Majority Foundation’s blog, which cites a study that claims: “Children should begin receiving formal education about sexual health as early as age 10″ because “sexuality and gender identity begin emerging between the ages of 10 and 14.” It’s important to reach kids while they are “still malleable,”the researchers said:


“If programs, based on the healthy adolescent framework, rooted in human rights and gender equity, are implemented at a time when adolescents are still malleable and relatively free of sexual and reproductive health problems and gender role bias, very young adolescents can be guided safely through this life stage, supported by their parents, families and communities.”

Hmmm. They want to target these programs, based on “gender equity,” at kids who “are still malleable and relatively free of . . . gender role bias.” What do you think those terms “gender equity” and “gender role bias” mean? And why are Carmen Rios and the Feminist Majority Foundation so excited about this? If you were a suspicious type of person, you might wonder about such things.

I have a simple theory about what motivates people to get into certain jobs.  Generally speaking, scientists want to find out how things work, engineers want to make things work, police like to bully people, etc. You can make the obvious extrapolation to some lesbian who wants to spend all her time teaching young girls about sex.