In fact, they're pretty well here. The New York Times has an uncharacteristically good and mostly reasonable article on coywolves (coyote/wolf/dog hybrids) and other natural hybrid animals being found across America:

Should You Fear the Pizzly Bear? 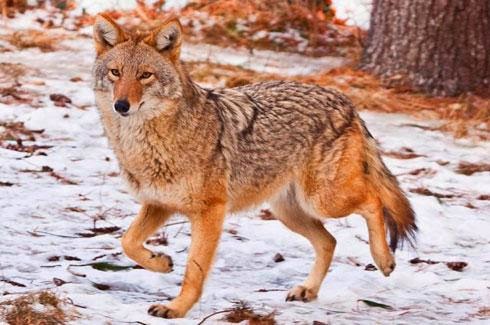 . . .The creation story White and his colleagues have pieced together begins during European colonization, when the Eastern wolf was hunted and poisoned out of existence in its native Northeast. A remnant population — “loyalists” is how White refers to them — migrated to Canada. At the same time, coyotes, native to the Great Plains, began pushing eastward and mated with the refugee wolves. Their descendants in turn bred with coyotes and dogs. The result has been a creature with enough strength to hunt the abundant woodland deer, which it followed into the recovering Eastern forests. Coywolves, or Eastern coyotes, as White prefers to call them, have since pushed south to Virginia and east to Newfoundland. The Eastern coyote is a study in the balancing act required to survive as a medium-size predator in a landscape full of people. It can be as much as 40 percent larger than the Western coyote, with powerful wolflike jaws; it has also inherited the wolf’s more social nature, which allows for pack hunting. (In 2009, a pack of Eastern coyotes attacked and killed a 19-year-old Canadian folk singer named Taylor Mitchell in Cape Breton, Nova Scotia.) But it shares with coyotes, some 2,000 of which live within Chicago’s city limits, a remarkable ability to thrive in humanized landscapes.

“We’re kind of privileged in the last 100 years to watch the birth of this entity,” White told me, “and now the evolution of this entity across this North American landscape that we’ve modified.” Evolutionarily speaking, coyotes diverged from gray wolves one million to two million years ago, and dogs from wolves roughly 15,000 years ago. Yet over the past century, as agriculture moved to the Midwest and California, farmland in the East reverted to woodlands. The rise of fossil fuels reduced the demand for firewood. Forests spread, and deer and other prey proliferated, while human intolerance for wolves kept a potential competitor at bay. . .

The "coywolves' have been widely sighted in the northeast and mid-Atlantic states, including our own Calvert County, although I have yet to see one. I did see one scrawny western coyote standing along the side of the Pacific Coast highway, and he looked like a potential meal for the coywolf above.

Found at Althouse, who reads the NYT so you don't have to.