The administrator of the Centers for Medicare and Medicaid Services (CMS) deleted some of her emails and may not be able to cooperate with a congressional investigation into the flawed Obamacare rollout, CMS has warned Congress.

Marilyn Tavenner, who was appointed by President Obama to take over CMS within the Department of Health and human Services in 2013 — prior to the Obamacare rollout — deleted some of her emails and did not save hard copies as the Federal Records Act requires her to do, MSNBC reported Thursday.

Though Tavenner’s computer did not crash like ex-IRS official Lois Lerner’s computer allegedly did, Tavenner may be unable to cooperate with House Oversight and Government Reform Committee subpoenas.

“During her entire tenure at CMS, Ms. Tavenner’s CMS email address, which is accessible to both colleagues and the public, has been subject to write-in campaigns involving thousands of emails from the public,” according to a letter CMS sent Wednesday to the National Archives and Records Administration.

“Therefore, she receives an extremely high volume of emails that she manages daily. To keep an orderly email box and to stay within the agency’s email system capacity limits, the Administrator generally copied or forwarded emails to immediate staff for retention and retrieval, and did not maintain her own copies.”

CMS noted that this practice of not keeping emails “continued until November 2013,” just one month after the Obamacare website launched.

This sounds like complete and total BS. Well before 2013, the Feds had complete and "eternal" backup systems on all email. Even if she deleted everything off her hard drive and pulverized the hard drive, the relevant emails should exist in the backup system, and in the senders and recipients email in boxes and out boxes, in the event they are also federal employees. All it takes is the order to the proper IT people from people with sufficient authority to make it happen. And I know from personal experience that people from the Federal Attorney offices are available to make these things happen if necessary.


As news breaks about the Department of Health and Human Services’ missing HealthCare.gov e-mails, it’s pertinent to note how difficult it has been to obtain records in general about Obamacare, as I’ve learned personally over the past many months.

In Nevada, National Review had to sue the state health exchange before we were able to obtain records about how many Obamacare navigators had criminal backgrounds, despite the fact that they were handling consumers’ private information. (As it turned out, at least eight did.)

We faced similar struggles in California, where the health exchange employed some twisted logic to explain why it could not release the full records regarding navigators’ criminal backgrounds:


“All of these documents are nondisclosable because ‘the public interest served by not disclosing the record clearly outweighs the public interest served by disclosure of the record,’” a lawyer for the insurance exchange wrote, citing California Government Code §6255. “Disclosing the names and criminal records of individuals applying to assist in Covered California’s push to enroll vast numbers in health insurance by March 31, 2014, is likely to discourage participation in this critical program and thus harm the people of California.”

In the end, we discovered that at least 43 convicted criminals were working as Obamacare navigators in California, including individuals who had committed serious financial crimes.

And those are the states where we even managed to get an answer. Though the state-by-state back-and-forth is a long story, we were denied public records even after appeal in the District of Columbia, and we’ve struggled to get clear answers elsewhere, too. . .

As Instapundit quipped: WHEN OBAMA SAID HIS ADMINISTRATION EMBRACED “THE SPIRIT OF STONEWALL,” I THOUGHT IT MEANT HE WAS GAY-FRIENDLY: 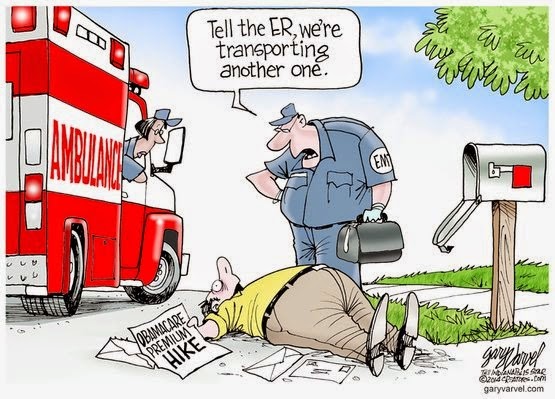 Oh, by the way, 90% of people without insurance won’t have to pay ObamaCare’s mandate penalty after all


. . .The feds were expecting a certain amount of revenue from uninsured people opting to pay the individual mandate penalty instead of buying insurance. But the mandate is unpopular, and since the people who are most likely to end up paying it are core Democratic voters, i.e. young adults, it might be especially dangerous electorally for the White House to be sticklers about collecting the money. Politics versus economics once again.

Which do you suppose won this round?


Almost 90% of the nation’s 30 million uninsured won’t pay a penalty under the Affordable Care Act in 2016 because of a growing batch of exemptions to the health-coverage requirement…
The Obama administration has provided 14 ways people can avoid the fine based on hardships, including suffering domestic violence, experiencing substantial property damage from a fire or flood, andhaving a canceled insurance plan. Those come on top of exemptions carved out under the 2010 law for groups including illegal immigrants, members of Native American tribes and certain religious sects…
Patrick Getzen, vice president and chief actuary at Blue Cross and Blue Shield of North Carolina, said he saw more “older and sicker people” enrolled in 2014 than projected. He attributed some of that to the weakened mandate. “With a stronger penalty and less broad exemptions, that would be better for the risk pool.”…
Critics have assailed one exemption for people who “experienced another hardship obtaining health insurance” as too broad. That exemption asks for documentation if possible but doesn’t require it.

Two years ago, CBO estimated that six million uninsured people would fail to qualify for a hardship exemption and be forced to pay the penalty, producing $7 billion in revenue. Today we’re down to four million who fail to qualify and $4 billion in revenue. What happened in the interim? You already know: Late last year, HHS quietly added a “temporary” hardship exemption for anyone who’d had their old insurance plan canceled, even though canceling old plans was the whole point of ObamaCare. As Ezra Klein put it, the feds were now treating ObamaCare itself as a hardship worthy of an exemption. (That’d make a dynamite attack ad for the GOP if the law wasn’t too complicated to explain in 30 seconds.) Then, four months ago, HHS went a step further for good measure and added the catch-all hardship category described in the last paragraph of the excerpt above — with no requirement that the applicant provide proof that they were really suffering from a hardship. In other words, we’ve gone from Obama waging a legal war before the Supreme Court to protect the mandate to Obama handing out exemptions essentially as a matter of right, no questions asked, to anyone who wants one. It’s de facto repeal of the mandate, albeit on a case by case basis. (Not unlike his approach to immigration, in which he’s going to repeal parts of U.S. immigration law de facto in the guise of exercising “prosecutorial discretion” towards each individual illegal.) It’s also a $3 billion hit to the federal coffers, but so what? It makes jittery Democrats feel better before the midterms and that’s what’s important.

It's so nice of the Chinese to offer to make up the difference. . .

Last word to Smitty of the Other McCain: #ObamaCare River of Lies Rolls On


So, after all the Individual Mandate faffing about, Hot Air reports that as many as 90% may not get nicked with a penalty (for now):

To summarize, Obama is taking your liberty and training you to accept being spared the whip as an ersatz liberty substitute.

In defense of Obama, if the American people are retarded enough to stand for this, then DOOM ON US.