Scientist transmits message into the mind of a colleague 5,000 miles away using brain waves


Brain-wave sensing machines have been used to ‘telepathically’ control everything from real-life helicopters to characters in a computer game.
Now the technology has gone a step further by allowing someone in India to send an email to his colleague in France using nothing but the power of his mind.

The researchers used electroencephalography (EEG) headsets to record electrical activity from neurons firing in the brain, and convert the words ‘hola’ and ‘ciao’ into binary. In EEG, electrical currents in the brain are linked with different thoughts that are then fed into a computer interface. This computer analyses the signal and controls an action.

In the latest study, published in Plos One, researchers decided to replace the computer interface with another brain to receive the signals.

In the initial test, the greeting was sent from a volunteer in Thiruvananthapuram, India to Strasbourg, France. There, a computer translated the message and then used electrical stimulation to implant it in the receiver’s mind.

This message appeared as flashes of light in the corner of their vision. 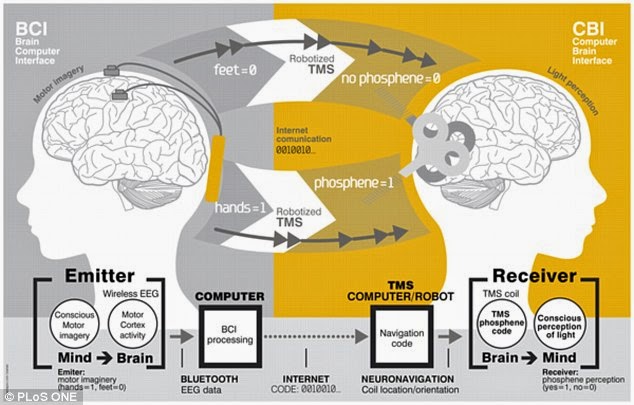