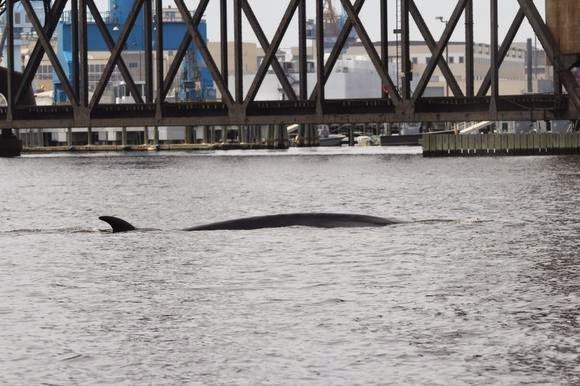 
The sickly whale that was spotted swimming erratically in the rivers and creeks of the Chesapeake Bay for the past week was found dead Thursday afternoon along the shore of St. Julien's Creek in Chesapeake.

The Stranding Response Team of the Virginia Aquarium in Virginia Beach had been tracking the 40-foot whale every day since it was first discovered in the lower James River last week. Early Thursday afternoon, following reports that the whale was motionless, the team confirmed it had died.

"Yesterday it was kind of stuck in some shallow water, and during high tide it managed to free itself of that only to go across the creek and kind of be stranded there," said aquarium spokeswoman Joan Barns.

"It is sad. So many people have been so interested, and we hate to be the deliverer of bad news. It is kind of nature taking its course."

The creature was believed to be a sei whale — a "great whale" that normally inhabits deep ocean waters.

As tempting as it is to quip that getting into the Bay made the whale sick, it far more likely that the whale got sick at sea, became disoriented, and entered the Bay by accident, or looking for a calm refuge.

And even if they choose not to blow it up?