IRS: "Sure, We Have Lerner's Emails, It's Just Too Much Trouble"

Cited from the TaxProf's blog, where Paul Caron has been keeping the canonical account of the IRS scandal.

Department of Justice attorneys for the Internal Revenue Service told Judicial Watch on Friday that Lois Lerner’s emails, indeed all government computer records, are backed up by the federal government in case of a government-wide catastrophe. The Obama administration attorneys said that this back-up system would be too onerous to search. The DOJ attorneys also acknowledged that the Treasury Inspector General for Tax Administration (TIGTA) is investigating this back-up system.

And besides, they contain things that might get us in whole lot of trouble, so it's best they stay safely hidden in the backup tapes in case a Carrington Event or terrorist hack attack wipes the feds working servers clean.


We obviously disagree that disclosing the emails as required would be onerous, and plan to raise this new development with Judge Sullivan.

This is a jaw-dropping revelation. The Obama administration had been lying to the American people about Lois Lerner’s missing emails. There are no “missing” Lois Lerner emails – nor missing emails of any of the other top IRS or other government officials whose emails seem to be disappearing at increasingly alarming rate. All the focus on missing hard drives has been a diversion. The Obama administration has known all along where the email records could be – but dishonestly withheld this information. You can bet we are going to ask the court for immediate assistance in cutting through this massive obstruction of justice.

This corresponds with my recollection of the federal government email system around the time in question when we were told that although we had to keep our inboxes and archives trimmed, everything coming and going out was being slurped up by backup servers, which we were warned contained anything incriminating, but would be extremely difficult (or impossible) to access for ordinary restoration for the federal slugs (but a division chief?). 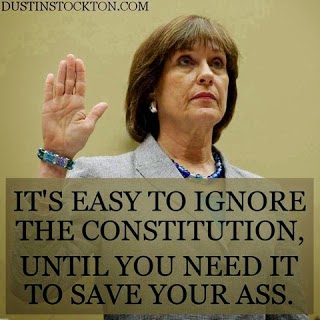 Even more "interesting" is the development that the IRS admits that they destroyed Lois Lerner's Blackberry, which would have contained all her emails a year after the congressional investigation into the IRS started.


The IRS filing in federal Judge Emmet Sullivan’s court reveals shocking new information. The IRS destroyed Lerner’s Blackberry AFTER it knew her computer had crashed and after a Congressional inquiry was well underway. As an IRS official declared under the penalty of perjury, the destroyed Blackberry would have contained the same emails (both sent and received) as Lois Lerner’s hard drive.

We all know by now that Lois Lerner’s hard drive crashed in June 2011 and was destroyed by IRS. The emails of up to twenty other related IRS officials were missing in remarkably similar “crashes,” leading many to speculate that Lois Lerner’s Blackberry perhaps held the key. Now, the Observer can confirm that a year after the infamous hard drive crash, the IRS destroyed Ms. Lerner’s Blackberry—and without making any effort to retain the emails from it.

Judge Sullivan has had to pry information from the IRS to learn anything about Ms. Lerner’s Blackberry. Now, with these latest revelations, I’m confident he’s not finished.

In two elusive and nebulous sworn declarations, we can glean that Ms. Lerner had two Blackberries. One was issued to her on November 12, 2009. According to a sworn declaration, this is the Blackberry that contained all the emails (both sent and received) that would have been in her “Outlook” and drafts that never were sent from her Blackberry during the relevant time.

Another in a long line of remarkable "coincidences" in the IRS scandal. But even that won't matter if Judge Sullivan forces them to come up with the back up tapes.