Why Solar and Wind Energy Don't Cut the Mustard

Basically two problems reduce their real world efficiency, the indeterminacy of their power sources, and the low energy production compared to their energy consumption in the manufacturing process:

The Catch-22 of Energy Storage


The problem is analysed in an important paper by Weißbach et al.1 in terms of energy returned on energy invested, or EROEI – the ratio of the energy produced over the life of a power plant to the energy that was required to build it. It takes energy to make a power plant – to manufacture its components, mine the fuel, and so on. The power plant needs to make at least this much energy to break even. A break-even powerplant has an EROEI of 1. But such a plant would pointless, as there is no energy surplus to do the useful things we use energy for.

Unless, of course, the government does it; they can suspend repeal the laws of economics and thermodynamics.


There is a minimum EROEI, greater than 1, that is required for an energy source to be able to run society. An energy system must produce a surplus large enough to sustain things like food production, hospitals, and universities to train the engineers to build the plant, transport, construction, and all the elements of the civilization in which it is embedded.

For countries like the US and Germany, Weißbach et al. estimate this minimum viable EROEI to be about 7. An energy source with lower EROEI cannot sustain a society at those levels of complexity, structured along similar lines. If we are to transform our energy system, in particular to one without climate impacts, we need to pay close attention to the EROEI of the end result.

The EROEI values for various electrical power plants are summarized in the figure. The fossil fuel power sources we’re most accustomed to have a high EROEI of about 30, well above the minimum requirement. Wind power at 16, and concentrating solar power (CSP, or solar thermal power) at 19, are lower, but the energy surplus is still sufficient, in principle, to sustain a developed industrial society. Biomass, and solar photovoltaic (at least in Germany), however, cannot. With an EROEI of only 3.9 and 3.5 respectively, these power sources cannot support with their energy alone both their own fabrication and the societal services we use energy for in a first world country. 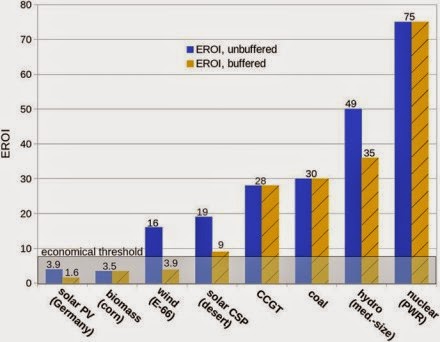 Note that solar energy is well below the economical threshold, while wind is above it, until you have to provide back up power to tide you past the periods of no wind. If you're content to live in the dark at night when the wind doesn't blow, it works. I think as a society we will decline to make that choice.

Now, wind and solar might be improved, by lowering manufacturing energy costs, and raising their efficiency, and extending their useful life span, but they have a very long way to go before they can compete with natural gas, coal, hydro, and nuclear.  In particular, this last graph points to what a shame it is we have been unable to expand our nuclear capacity because of bogus health and environmental complaints.
Posted by Fritz at 5:11 PM