The Denisovans Sure Got Around, Didn't They?

Scientists have found the oldest DNA evidence yet of humans’ biological history. But instead of neatly clarifying human evolution, the finding is adding new mysteries.

In a paper in the journal Nature, scientists reported Wednesday that they had retrieved ancient human DNA from a fossil dating back about 400,000 years, shattering the previous record of 100,000 years.

The fossil, a thigh bone found in Spain, had previously seemed to many experts to belong to a forerunner of Neanderthals. But its DNA tells a very different story. It most closely resembles DNA from an enigmatic lineage of humans known as Denisovans. Until now, Denisovans were known only from DNA retrieved from 80,000-year-old remains in Siberia, 4,000 miles east of where the new DNA was found.

And, currently, a fraction of the Denisovan genome is found in modern populations centered in Melanesia.  So, despite the fact that we have very few remains that can be ascribed to the Denisovans, they covered much of the the prehistoric world outside of Africa, and clearly contributed to modern human evolution.

The mismatch between the anatomical and genetic evidence surprised the scientists, who are now rethinking human evolution over the past few hundred thousand years. It is possible, for example, that there are many extinct human populations that scientists have yet to discover. They might have interbred, swapping DNA. Scientists hope that further studies of extremely ancient human DNA will clarify the mystery. 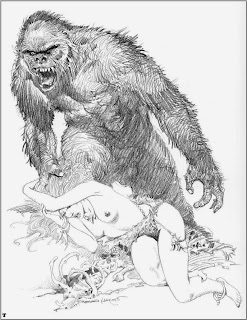 But not too quickly, I hope.  I expect many more 'Denisvoan' posts.


“Right now, we’ve basically generated a big question mark,” said Matthias Meyer, a geneticist at the Max Planck Institute for Evolutionary Anthropology in Leipzig, Germany, and a co-author of the new study.

Don't you hate it when that happens? No, wait; that's the fun part of science, speculating.  Then you have to do the hard stuff and find the evidence and all.

Wombat-Socho has the Le Grande Rule 5 post "Slow Turning", up at The Other McCain on time and within budget.
Posted by Fritz at 6:00 AM