As I reported yesterday, our weather has been anomalously warm, with temperatures approaching 70 degrees while we walked on the beach.  Last night, the air became even warmer, and positively muggy; this morning when we woke up the thermometer read 72.  However, radar showed a large band of rain sliding up from the south.  I quickly (well, relatively) finished my coffee and the Fred Reed post, and went out to move some leaves from the front yard to the back lot.  While I was on the last load of leaves, the rain arrived in force, and the temperature dropped to 65, and is still dropping.
While I dry off, I'll try to serve up yesterday's Obamacare Schadenfreude, but I'm afraid it's a pretty thin gruel.  Not much real happens on Saturday, except for a rehash of the the event of the week, and Sunday is generally worse, except for the pontifications of the TV pundits.


The Oregonian reports that the robocalls from Cover Oregon consist of a woman's voice saying "If you haven't heard from us by December 23, it is unlikely your application will be processed for January 1 insurance coverage. If you want to be sure you have insurance coverage starting January 1, you have other options."

The phone call goes on to say that applicants who don't receive confirmation will be able to get coverage from an insurance company or agent, but will not be eligible for tax credits.

It is another embarrassing moment for the exchange, which has had to rely exclusively on paper applications processed manually by more than 400 workers after the website was not ready to launch on schedule in October. As a result, Oregon has been the slowest state to enroll people in private insurance, though the pace has picked up significantly in the past two weeks.

As a former resident of the Beaver State, (which you can think of as Delaware with lumberjacks), I must say I'm not shocked.  The state has as much of the urban/rural split as any place in the country, and the thought that the technocrats of Portlandia, Salem and Eugene couldn't corral enough of the country folk scraping by to fill their five one year plan bemuses me highly.  But, one thing you gotta say, (ala Tom Lehrer), they had all the best songs...

Now that's right out of Portlandia...

In time when we are worried about how millions of credit cards and identities were compromised when credit card information was hacked from Target, this one is especially reassuring (not):


A top HealthCare.gov security officer told Congress there have been two, serious high-risk findings since the website’s launch, including one on Monday of this week, CBS News has learned.

Teresa Fryer, the chief information security officer for the Centers for Medicare and Medicaid Services (CMS), revealed the findings when she was interviewed Tuesday behind closed doors by House Oversight Committee officials. The security risks were not previously disclosed to members of Congress or the public. Obama administration officials have firmly insisted there’s no reason for any concern regarding the website’s security. …

Details are not being made public for security reasons but Fryer testified that one vulnerability in the system was discovered during testing last week related to an incident reported in November. She says that as a result, the government has shut down functionality in the vulnerable part of the system. Fryer said the other high-risk finding was discovered Monday.

Fryer then told Congress that she recommended the site be shut down to address the security gaps — and was overruled...

In rehashed news, why pounding on Pajama Boy is justified:


Emma Roller of Slate, who attended college with Krupp, bemoaned the articles written about Pajama Boy after his name was discovered. “What these stories ignore is that trying to glean some relevant information about a policy from its respective human talisman is always, always a horrendously stupid idea,” Roller said.

But the point she misses is that even in highlighting Krupp’s life the story is not about finding “relevant information about a policy,” but about discovering whether the poster boy is an accurate representation of that policy.

As in the case of the woman featured on healthcare.gov, learning who she was after the website was mocked was not poor journalism. People wanted to know what the face of healthcare.gov thought about the website’s failures, because she was someone they could recognize. The taunting she received from people who recognized her was unfair, because she had nothing to do with the website.

But Krupp was involved in the failed campaign for which he was the poster boy. Finding that out was the reason journalists pry into the lives of poster children — to find out if they had a connection to the policy.

With Krupp, Americans learned that the person behind the mockery was exactly what they imagined him to be. 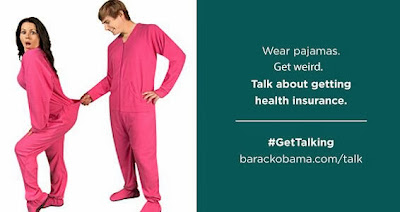 Chris Sleazy Cillizza of the Washington Post anointed Pajama Boy with his "Worst Week in Washington" title, in a clear effort to deflect the blame from the Preznit.


Pajama Boy was the latest swing and miss in efforts by Obama allies to persuade “young invincibles” who lack health insurance to sign up for coverage under the Affordable Care Act. Who could forget the “brosurance” ads featuring a college guy doing a keg stand with a “got insurance?” headline? Or the one with a cardboard cutout of Ryan Gosling?

Pajama Boy, for getting people laughing at you rather than talking about health insurance, you had the worst week in Washington. Congrats, or something.

In more old news, middle class supporters of Obmacare continue to find out to their regret that they were the people who were expected to pay for others. More surprisingly, it's reported by the New York Times:


Ginger Chapman and her husband, Doug, are sitting on the health care cliff.

The cheapest insurance plan they can find through the new federal marketplace in New Hampshire will cost their family of four about $1,000 a month, 12 percent of their annual income of around $100,000 and more than they have ever paid before.

Even more striking, for the Chapmans, is this fact: If they made just a few thousand dollars less a year — below $94,200 — their costs would be cut in half, because a family like theirs could qualify for federal subsidies.

Is that insane or what?


The Chapmans acknowledge that they are better off than many people, but they represent a little-understood reality of the Affordable Care Act. While the act clearly benefits those at the low end of the income scale — and rich people can continue to afford even the most generous plans — people like the Chapmans are caught in the uncomfortable middle: not poor enough for help, but not rich enough to be indifferent to cost.

“We are just right over that line,” said Ms. Chapman, who is 54 and does administrative work for a small wealth management firm. Because their plan is being canceled, she is looking for new coverage for her family, which includes Mr. Chapman, 55, a retired fireman who works on a friend’s farm, and her two sons. “That’s an insane amount of money,” she said of their new premium. “How are you supposed to pay that?”

And the Debby Downers of the slightly right media continue to fret over yesterday's big issue, the continued rewriting of Obamacare on the fly, notably the exemption of once class of people from the  individual mandate at the last minute:


It’s hard to come up with new ways to describe the Obama administration’s improvisational approach to the Affordable Care Act’s troubled health insurance exchanges. But last night, the White House made its most consequential announcement yet. The administration will grant a “hardship exemption” from the law’s individual mandate, requiring the purchase of health insurance, to anyone who has had their prior coverage canceled and who “believes” that Obamacare’s offerings “are unaffordable.” These exemptions will substantially alter the architecture of the law’s insurance marketplaces. Insurers are at their wits’ end, trying to make sense of what to do next.
...

The new ‘hardship exemption’ applies to those with canceled coverage

Section 1411(c)(5)(A) of the Affordable Care Act grants the Secretary of the U.S. Department of Health and Human Services the power to grant a “hardship exemption” from the individual mandate that requires most Americans to purchase health insurance or pay a fine. The administration has, in effect, declared that Obamacare’s regulations are themselves a “hardship” worthy of mass exemption.

Good point.  The new hardship is a deliberate creation of the new law.  Remember that as you go to the polling booth.


What an incredible political turnabout. Mr. Obama and HHS used to insist that the new plans are better and less expensive after subsidies than the old "substandard" insurance. Now they're conceding that at least some people should be free to choose less costly plans if they prefer—or no plan—and ObamaCare's all-you-can-eat benefits rules aren't necessary for quality health coverage after all.

But the White House is shredding ObamaCare's economics on its own terms. Premiums for catastrophic products are based on the assumption that enrollees would be under 30. A 55-year-old will now get a steep discount on care courtesy of the insurer's balance sheet, while other risk-tiers on the exchanges will have even fewer customers to make the actuarial math work.

Pulling the thread of the individual mandate also means that the whole scheme could unravel. Waiving ObamaCare rules for some citizens and continuing to squeeze the individual economic liberties of others by forcing them to buy what the White House now concedes is an unaffordable product is untenable. Mr. Obama is inviting a blanket hardship amnesty for everyone, which is what Republicans should demand.

Linked at American Power Blog as a Rule 5 Post. It must have been the pink jammies, 'cause the Portlandia chick ain't that hot.
Posted by Fritz at 12:43 PM