Obamacare Schadenfreude for a Sunny Day

After a couple days of gloom and rain (apologies to the poor suckers in upstate New York who received up to 5 feet of snow with this last system), the sun came out this morning, and the squirrel is trying desperately to extract a few safflower seeds from the "squirrel proof" (really, squirrel frustrating) feeder.
Yesterday wasn't much of a day for Obamacare Schadenfreude, so let's get to work, so we can get outside.  I'll try to keep the snark to a minimum

Obamacare Has Lost the Uninsured

Let that sink in: What that means is that regardless of how bad the old system—the system that for whatever reason left them uninsured—was, a majority of people without health coverage now think that Obamacare makes it worse.

That’s how poorly the rollout of the health law is perceived to have gone. The exact group the law was designed to help have instead turned on the law. It’s never been particularly popular with the wider public, but now even those who were supposed to be beneficiaries are skeptical.

So much for running on Obamacare...


. . .The Affordable Care Act, commonly dubbed Obamacare, has mostly arrived on the island in the form of a $6.3 billion social welfare check allocated to the government to continue to pay for its Medicaid and for its separate, free state-run insurance program called "Mi Salud," between 2014 and 2019.
And that could be disastrous for Puerto Rico.

Roughly 1.7 million Puerto Ricans already depend on free health insurance in the island and local doctors are concerned that the additional financial infusion to the program will make the territory even more dependent on welfare.
. . .
Despite the bleak economic outlook, Puerto Rico’s surprisingly low 7.2 percent uninsured rate is actually second-lowest compared to all states, behind Massachusetts.

“Our healthcare system is going to be entirely a welfare system," warned Dr. Guillermo Tirada, an internal medicine specialist in Puerto Rico for 18 years. "It's sad."

Thousands of HealthCare.gov sign-ups didn’t make it to insurers


Enrollment records for close to 15,000 HealthCare.gov shoppers were not initially transmitted to the insurance plans they selected, according to a preliminary federal estimate released Saturday.

While these cases pose a challenge for the Obama administration, officials say they believe the situation is improving. Since early December, fewer than 1 percent of HealthCare.gov enrollments did not make their way to health insurance plans.
...
The preliminary estimate that fewer than 15,000 enrollments failed to reach carriers comes from a recently completed federal analysis that compared the number of shoppers who clicked "enroll" with the number of digital files HealthCare.gov fired off to health-insurance plans.
...
The federal government has repeatedly urged shoppers to reach out to their health insurance plan to confirm their enrollment and to pay their first month's premium, which is required before the insurer begins to pay doctors' bills.

Be sure you give them your credit card info so they can bill you...


For the second week in a row, the Washington Healthplanfinder website is down, and it's causing problems for people who are dealing with billing issues. Some of them say the website is mistakenly debiting their accounts.

Shannon Bruner of Indianola logged on to her checking account Monday morning, and found she was almost 800 dollars in the negative.

“The first thing I thought was, ‘I got screwed,’” she said.

Josh Bruner started his own business this year as an engineering recruiter. They said it’s forced them to pay a lot of attention to their bills and their bank accounts.

“Big knot in my gut because we're trying to keep it together,” said Shannon Bruner. “It's important to me that this kind of stuff doesn't happen.”

OK, so maybe that's not such a good idea.

O-Care contractor to comply with subpoena


House Oversight Committee Chairman Darrell Issa (R-Calif.) announced Friday that an ObamaCare contractor would comply with a subpoena he issued, despite efforts by the Obama administration and some Democrats to keep the documents out of his hands.

After consulting with its legal counsel, MITRE Corp., a contractor working to assess security issues with the ObamaCare website, determined that it “has no alternative but to comply with the terms of a Congressional subpoena absent some form of judicial intervention.”

MITRE was the second ObamaCare contractor to say on Friday it would comply with the disputed subpoena, following CSSi.


Hackers were able to obtain personal information from 104,179 Department of Energy employees and contractors during an attack this summer, according to the Inspector General.

An attack in July 2013, one of at least three cyber security breaches at the department, allowed hackers to access individuals’ Social Security and bank account numbers with “relative ease.”

The Energy department was aware of “early warning signs” that personally identifiable information (PII) of its employees was at risk, according to the special report of the incident released last Friday.

WSJ: About those Healthcare.gov fixes …


Insurers and federal officials sifting through insurance applications under the health-care law have identified a raft of errors, including missing customers and inaccurate eligibility determinations that mean people may be enrolled in the wrong coverage. …

In some cases described by a state official with knowledge of the matter, legal immigrants who aren’t yet eligible for Medicaid in Illinois—it takes five years of residence to join the state-run programs for low-income people—were nevertheless told they would be enrolled.

The risk that consumers could remain in limbo as the health law’s coverage expansion begins in January has been a continual political threat to the Obama administration, which has addressed flaws—ranging from a malfunctioning website to the cancellation of health policies that don’t meet the law’s requirements—with a patchwork of last-minute fixes.

At least someone is willing to call a spade a spade...

Ted Cruz: ObamaCare Is a Disaster

Already, more than 4 million people have lost their insurance plans because of Obamacare. And millions more Americans’ health insurance is at risk. Some experts predict anywhere from 80 million to 129 million private health plans will be canceled or forcibly changed over the next year.

Millions of Americans are also discovering that Obamacare will not allow them to keep their doctors or be treated at cutting-edge medical facilities, as more and more doctors and hospitals opt out of Obamacare.

Watchdog.org found that 11 of the top 18 hospitals nationwide had only one or two Obamacare insurance carriers.

Over at "The Other McCain", news that lefty bloggers are making light of a sick conservative blogger who lost his health insurance due to Obamacare: You Stay Classy, LGF


Jim Hoft of Gateway Pundit is one of the nicest guys in the blogosphere and when he got sick this summer, I was happy to help by guest posting at his site. However, I had no idea of how sick he really was:


In August 2013 I became very sick with what I thought was a cold. After a few days I lost vision in my left eye and I checked into the hospital. I soon found out that what I thought was a summer cold was actually Strep bacteria poisoning my blood stream. The bacteria blinded my left eye, ate a hole through my heart, caused five strokes on both sides of my brain and forced the removal of my prosthetic left knee.
. . .
This week I found out I am going to lose my insurance. The company that carried me is leaving the Missouri market. I will have to find something else. 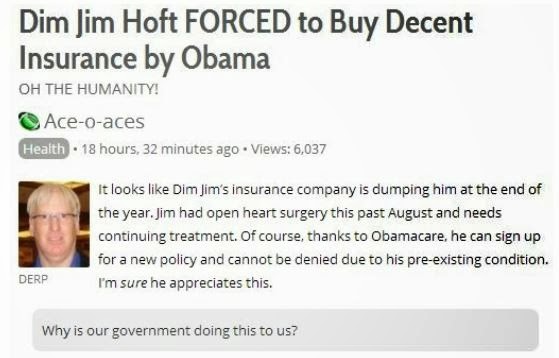 This is as dishonest as it is cruel — “thanks to ObamaCare,” my ass!

What these deluded fools would have you believe, basically, is that there was no such thing as “decent” health care in America until Obama and Democrats invented it. According to these idiots, cancellations caused by ObamaCare are actually good news, because hey, the government will force other companies to issue you a policy. But this isn’t the same as, “If you like your plan, you can keep your plan,” is it?

No, it’s not. As Jim says, he had “excellent” insurance that gave him access to the best treatment. Jim paid extra for that plan, because it was the plan he wanted, and the regulatory mandates of ObamaCare have now taken Jim Hoft’s plan away from him.


The Times reports on the latest Saturday ObamaCare bad news:

WASHINGTON — The Obama administration said Saturday that it had reduced the error rate in enrollment data sent to insurance companies under the new health care law, even as insurers said that files they received from the government in the last few days were riddled with mistakes.

Trouble in paradise! And lest the significance elude you (buying insurance is complicated, after all), the Times breaks it down:


The quality of the data is important; it could affect the ability of people to get medical care and prescription drugs when they go to doctors’ offices and pharmacies starting next month.

Really? You mean doctors and pharamcists and insurers actually need that info for billing purposes? What happened to exhortations to rely on the kindness of strangers?

MAybe an illustrative example would have helped First Reader grasp this. If I subscribe to the Times by way of their website but they don't communicate my home address correctly to the delivery team, the paper will end up in my neighbor's driveway and eventually find its way to their puppy rather than my parakeet, so where is the value added, hmm?

I pity the poor parakeet.