It has been observed for decades that Earth's weather appears to correlate with the sunspot cycle.  However, the causal link has been difficult to understand.  While solar output varies slightly along with the sunspots cycle, the amount of variation, about 0.1% is insufficient to explain the variations of Earth's climate, which is several times greater, without some kind of amplifying feed back.  One theory that is actively being researched is a connection through cosmic rays, which are partially deflected away from the earth by the solar magnetic field, which is at a minimum during periods of low sunspot activity.  The hypothesis is that cosmic rays, which ionize molecules in the upper atmosphere, spark the nucleation of water droplets, and hence cloud formation, resulting in a cooler climate.  Experimental trials of this hypothesis, the so called Svensmark hypothesis, have been equivocal. 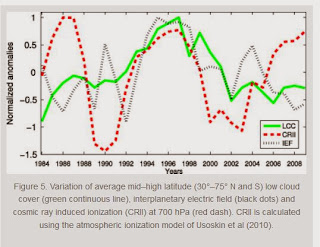 A new theory has just been published by which the solar magnetic field may modulate earth's climate without invoking the cosmic rays as an intermediate, instead acting on clouds directly through the interplanetary electric fields ("solar wind"):

In this letter we investigate possible relationships between the cloud cover (CC) and the interplanetary electric field (IEF), which is modulated by the solar wind speed and the interplanetary magnetic field. We show that CC at mid–high latitudes systematically correlates with positive IEF, which has a clear energetic input into the atmosphere, but not with negative IEF, in general agreement with predictions of the global electric circuit (GEC)-related mechanism. Thus, our results suggest that mid–high latitude clouds might be affected by the solar wind via the GEC. Since IEF responds differently to solar activity than, for instance, cosmic ray flux or solar irradiance, we also show that such a study allows distinguishing one solar-driven mechanism of cloud evolution, via the GEC, from others.

Yet another potential factor which the global climate models of the IPCC and other climateers.