On Friday I reported how the Russian research vessel MV Akademik Shokalskiy was stuck in the sea ice surrounding the Antarctic with a raft of scientists, media and tourists while trying to recreate/celebrate the voyage of Australian Sir Douglas Mawson and his 1911-1914 expedition, and to drum up support for global warming.


Bad weather on Monday forced back an Australian icebreaker struggling to reach a scientific expedition ship stranded off Antarctica, while snow and winds have prevented a helicopter rescue, authorities said.

The Aurora Australis made it to within 10 nautical miles of the MV Akademik Shokalskiy, which is stuck in an ice field, before retreating in the face of freezing winds and snow showers.

The authority said further rescue attempts could be made by the Australian vessel once the weather improves and it was now in open waters about 18 nautical miles east of the trapped Russian ship. 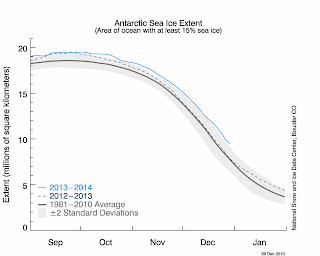 Ice in the Antarctic is on its way down from the Southern Hemisphere's winter high, but they are still above average for that time of year, as indeed, sea ice in Antarctic has been increasing in the Antarctic for several years, unlike the Arctic.

I have no doubt that the passengers and crew will eventually be rescued, and only a little doubt that the ship will be freed before it's crushed by ice, which is reported to be 3-4 meters thick around the Shokalskiy.

UPDATE:  following that last comment, it is now being reported that the Aurora Australis has, at least temporarily, given up attempt to reach the Shokalskiy, and the ice bound ship is being evacuated by helicopter. 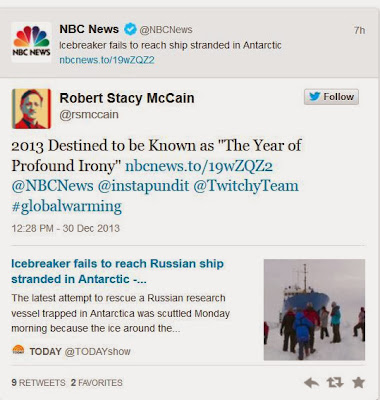