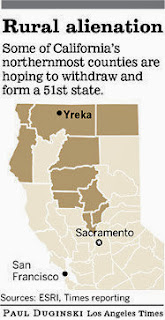 
. . .Within two weeks, Baird had crafted a declaration in support of the breakaway State of Jefferson and placed it on the Siskiyou County Board of Supervisors agenda. It was approved a week later on a 4-1 vote.

And with that, a movement that has waxed and waned for 150 years was born again.

Neighboring Modoc County's supervisors soon clamored for a similar declaration, and also voted "yea"; the Tehama County board agreed to put the matter to voters; and organizing committees sprang up in seven other counties.

The State of Jefferson flag — which dates to a 1941 effort — is now flown from the Nevada border west to the Pacific Ocean and as far south as Yuba City. (It features a gold pan with two X's, for the double-crossing purportedly dealt to residents of Northern California and southern Oregon by their respective seats of state government.)

Their complaints are the usual litany of complaints that rural counties make in states whose governments are dominated by urban liberals, along with a few uniquely Californian ones:

The menu of grievances includes a proposal to remove Klamath River dams, a crackdown on gold dredging and a fire prevention fee for rural areas that has been challenged in the courts as a tax..."We're governed by Los Angeles and San Francisco," the former logger said. "We live by their rules, and we don't like living by their rules."

A former resident of one of the counties involved, Humboldt (the southern coastal county in the map above), I can say with some certainty that the first order of business in the new state of Jefferson would be to legalize marijuana.

I don't expect it in my lifetime.


Still, Hayden believes the State of Jefferson will remain a state of mind. "I'm an optimist," he said, "but I'm not that much of an optimist."