The Speed of the Zombie Plague

Outbreak! Watch How Quickly An Epidemic Would Spread Across The World

Within an increasingly globalized and mobile world, the spread of contagion doesn’t work how it used to. But by taking these factors into account, theoretical physicist Dirk Brockmann and his colleagues have a radical new model that could predict the arrival times of the next global pandemic. The model relies on something called “effective distance,” and it destroys a centuries-old way of thinking about maps.

It’s a simple concept. Flight patterns and common aviation hubs are more accurate predictors of the spread of disease than distances traveled on foot, slow boat, or horse. Brockmann had a lightbulb go off when a student, Daniel Grady, biked to his office at Northwestern University and remarked that no matter how he traveled--by subway, bus, or bike--it always took the same amount of time to get there.

“And that is when it started,” Brockmann said. “In the modern world that’s so connected, old school, conventional geographic distance is not so meaningful anymore.”

Seems pretty obvious to me.  Here is the video they provide to illustrate their concept:

I don't find it very useful. The concept of time is hidden in the movement. Time, of course would depend on how quickly the disease communicates, and any latency in the infection, but why not show a real clock (or calendar) for scale with a realistic disease, say measles (which are making a resurgence thanks to anti-vaccine activism courtesy of activist assholes like Jenny McCarthy and Patrick Kennedy), or zombie-ism. Also, I presume the "clusters" represent major geographic regions infected from a major transit center. Why not label them, at least the biggest ones? 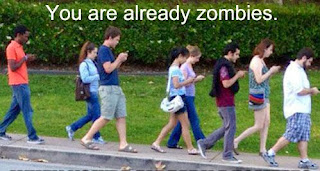 A paper published in Science today with co-author Dirk Hebling presents a culmination of that work, and Brockmann’s proudest breakthrough. It shows that the jumbled, erratic spread of disease can be reduced to simple, constant wave patterns, riding on effective distances, rather than geographic ones, through a “global mobility network.” Brockmann was able to prove the concept using data from the 2003 SARS outbreak and the 2009 H1N1 pandemic. When he plotted the epidemics’ actual arrival times in different cities against their effective distances, he found strong positive correlations--stronger than he had anticipated. 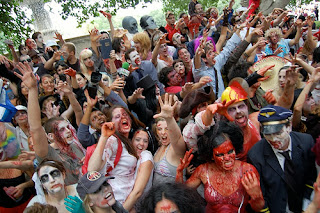 Linked at Pirate's Cove in this week's "Sorta Blogless Sunday Pinup."
Posted by Fritz at 7:37 PM