A Sunday episode of MSNBC’s political commentary show Melissa Harris-Perry has sparked outrage because of a segment that turned Mitt Romney’s adopted black grandson into the butt of a political joke.

Host Harris-Perry stirred the pot by displaying a giant photo of Mitt Romney’s extended family Christmas photo to a panel of liberal pundits and comedians.

‘It really sums up the diversity of the Republican party, the RNC. At the convention, they find the one black person,’ joked Dean Obeidallah, just one of the uncouth digs the group made at the expense of Kieran Romney.


I thought politicians kids were off limits? I guess he just meant democrats kids. Or maybe it doesn't extend to grandkids.  It's good to get the rules out in open.  We don't want to be playing Calvinball here. Some other MSNBC highlights for 2013:

UPDATE: Ace has one of his typically insightful posts on this incident: MSNBC Goofs on Romney's Black Grandson and Then Does the Fake Apology Bit


...I must point out once again that, despite the protestations of the media, despite its claims of professionalism, despite the belief of many in the media that they are "elite" in some fashion -- most cable shows are now essentially Televised Blogs. Melissa Harris-Perry and crew are just snarkin', because snarkin' is what the ADD audience loves. It doesn't matter if no one can actually announce what it is, precisely, that they're snarking on; snarky-snark isn't really logical expression. That's not it's point. The chronic snarkster isn't snarking to communicate any particular idea, except for two very base, primitive ones: We're Superior to This Thing We're Talking About, Whatever It Is, and We Constitute a Tribe, You and I, Mutually Loyal To Each Other, Because We All Hoot and Grunt At the Same THings... 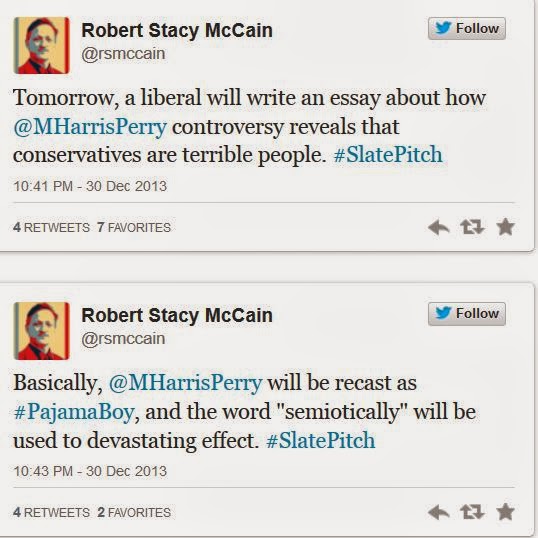