Two exciting blasts of news have scientific minds swimming—with the possibility of life in Europa's ocean. Today scientists announced evidence pointing to the possibility of ice plumes firing upward at the poles of Europa, potentially connected to the subterranean ocean on this icy moon of Jupiter. This comes soon after recent research found that Europa's ocean may move in Hadley cells, like Earth's does, which transfers heat from the equatorial region to the poles. 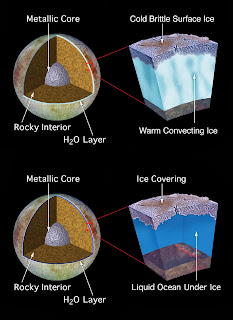 While the two stories come from separate research teams, the possibilities are sure to fuel interest in the moon and its potential habitability for life, says Lorenz Roth, a postdoctoral researcher at the Southwest Research Institute and one of the authors on the plume discovery.

"Once confirmed, Europa likely will once more be shifted into the focus of planetary research, and also of the search for potential habitable places away from Earth," Roth says. 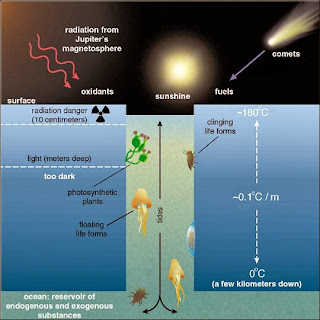 Roth and his team used spectral observations on the south pole of Europa to find traces of hydrogen and oxygen, indicating water activity at the pole. Roth says it could be an indication of a plume at the pole connected to the subsurface ocean, as is the case on Enceladus, a small moon of Saturn with geysers that spew plumes of water out of cracks in the surface (making it another object of speculation for life in our solar system). Or Europa's plumes could be the result of the sublimation of ice into water vapor. Unlike on Enceladus, water from the proposed plumes on Europa would mostly fall back to the surface, similar to the volcanic activity on the comparably sized Io. 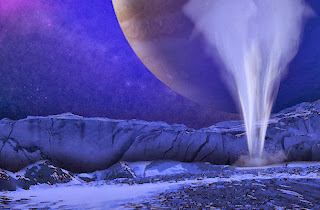 The plumes on Europa occur in a narrow 7-hour window during the moon's 85-hour orbital period around its gas giant parent. Some of the plumes may be as high as 124 miles, arising out of two distinct areas in the southern region. They occur when Europa is at its furthest point from Jupiter.

Wow, low gravity must help, but 124 miles is a long way to shoot water.