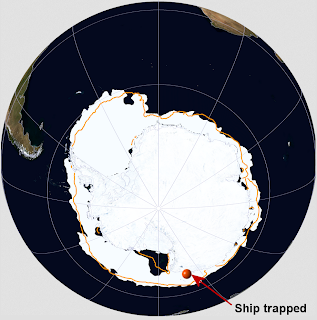 So much sea ice in Antarctica that a research vessel gets stuck, in summer!


The Australian Maritime Safety Authority (AMSA) is coordinating a search and rescue for a Russian passenger ship beset by ice approximately 1500 nautical miles south of Hobart.

The Falmouth MRCC received a distress message via satellite from a Russian flagged vessel, MV Akademik Shokalskiy, with 74 people about 7.20am (AEDT).

The ship is in the Australian Search and Rescue region, 100 nautical miles east of the French base Dumont D’Urville.

RCC Australia assumed coordination of the incident and issued a broadcast to icebreaking vessels in the area.

Three ships with icebreaking capability have responded, including the Australian Antarctic Division (AAD) vessel Aurora Australis, and are now en route to the area.

The closest vessels are at least two days sailing time away.

So what vital mission were they conducting?


The expedition is being led by Chris Turney, “climate scientist”, who has “set up a carbon refining company called Carbonscape which has developed technology to fix carbon from the atmosphere and make a host of green bi-products, helping reduce greenhouse gas levels.” The purpose of the expedition is “to discover and communicate the environmental changes taking place in the south.”

It seems they found out what the “environmental changes taking place in the south.” are. 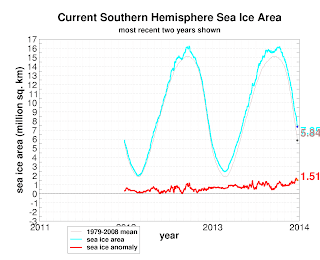 Basically, it was a trip to collect photographs for the BBC and Australian Broadcasting to use for global warming hype.

They should have to pay the entire cost of the rescue, including wear and tear on the ice breakers. As pointed out by Anthony Watts, Antarctic sea ice is doing just fine, and in fact, is more extensive this year than it has been at a comparable time since we started recording it.
Posted by Fritz at 5:06 PM